In Memory of Mami Lilia

Mami Lilia passed away on June 22, 2020, after a long illness. She was the mother of Jazmina Castro, one of the candidates who died along with Sr. Clare in the earthquake on April 16, 2016. She was also a lay member of the Home of the Mother.

Her example of faith and acceptance of God’s will are worth being told and made known because “Lilia shared her Faith in the way she lived, not just by her words,” as Sr. Sara Maria Jiménez remembers. “She was the community’s life and soul. Everyone knew that Lilia was there for anyone in difficulty. She was completely dedicated in God’s service.” 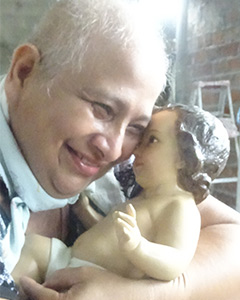 Lilia Italia Delgado Molina, better known as Mami Lilia, was born on July 15, 1964, in Chone in Manabí, Ecuador. While she grew up Catholic, she never married Angel Castro, the father of her six children. In 2008 she felt called to give more to the Lord and began to impart catechesis at San Cayetano Parish. She later became a coordinator of family catechesis. As she learned more about the Faith and became more involved in the parish, Mama Lilia began to feel a deep longing for the Eucharist. Since her children’s father did not want to get married, she proposed that they live separated so that she could finally go to Confession and receive Communion. 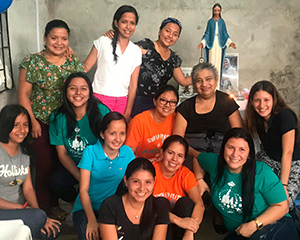 Her youngest daughter, Jazmina, met the Servant Sisters of the Home of the Mother and began to frequent their formation meetings and youth activities. Mami Lilia was happy about her daughter’s encounter with the sisters. Sr. Sara Maria Jiménez explains, "Mother and woman of faith that she was, Mami Lilia had the holy intuition that perhaps the Lord was calling her daughter to be one of the sisters she was so happy to be with." Mami Lilia prayed and prayed, until one day she could not resist anymore and said to her daughter, "Jazmina, how long are you going to make the Lord wait?" When Jazmina finally entered the community, Mami Lilia was the happiest woman on earth. Yet she knew her work was not done and continued to pray and offer herself up for Jazmina to  be faithful to her vocation. When Jazmina used go home to spend a few days with her family, Mami Lilia faciliataed things so that Jazmina kept her commitments, avoided situations that could threaten her vocation and did everything to avoid the visit home from becoming a stumbling block in Jazmina’s vocation.

In 2015, the illness was announced: uterine cancer. They operated on her and it looked like she was recovering, but the cancer soon came back. It was a hard blow for Jazmina, but seeing how her mother lived the disease, it became the best school of surrender and self-denial. Mami Lilia never complained, she was always smiling and thoughtful of others, forgetting her own pain. Sr. Teresa Castilla explains: “Woman of faith that she was, she always bore witness during her illness to the acceptance of God's will for her. Her faith was not weakened but rather helped her to put all her trust in the Lord.” 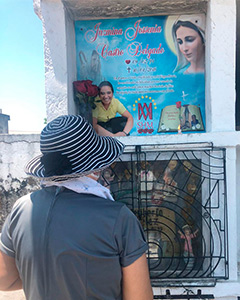 On April 16, 2016, the Lord asked Mami Lilia for a great sacrifice, surely more painful than the cancer she suffered. The main building of the Holy Family Educational Unit in Playa Prieta collapsed during the earthquake that struck the coast of Ecuador. When she was notified, her daughter Jazmina—just 21 years old—was with Sr. Clare Crockett, Mayra, Maria Augusta, Valeria and Catalina under the rubble. Mami Lilia and Ángel moved quickly from Chone to the site. Along with the parents of the other girls, they waited helplessly for the slow progress of the rescue work, with the uncertainty of whether they would find them alive. Sr. Sara Maria Jiménez explains what happened: “There were also relatives of the other girls who were with Jazmina. After many hours of searching, the first one they found lifeless was their daughter, Jazmina. The tears and despair of the rest of the mothers was heartbreaking, because they imagined that, if Jazmina was like this, their daughters would be found in the same state. But it was precisely Lilia who began to encourage and comfort the other mothers with words of faith, hope and trust in the Lord. In the midst of her immense pain she was able to comfort others.”

From this moment on, Mami Lilia's life of faith and union with God intensified in such a way that she lived more in Heaven— with Jazmina, Sr. Clare and the other girls— than on earth. She called them "my girls" and talked to them, laughed with them, dreamed of them... She kept them very close to her in the midst of her illness.

In 2019, much to her regret, she had to give up teaching catechism. Until then, as soon as she recovered a little from chemotherapy, she would be surrounded by children again. As Sr. Sara Maria describes, “She was on her feet until her body couldn't take it anymore. She continued to teach catechism and serve everyone as if nothing has happened. She loved the Lord with all her might.” She enjoyed all the moments that the Lord gave her, the family gatherings, the times when the sisters and the young women of the Home prayed the Rosary with her, etc. 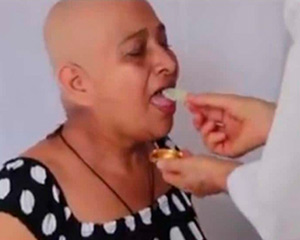 While she had strength she did not miss Mass, even though she arrived exhausted. Later, during the last year and a half of her life, the sisters went to her home daily to give her Holy Communion. Sr. Teresa Castilla recalls, “This filled her heart with joy. When we arrived she would say: ‘Jesusito [Little Jesus] is here.’ It was normal to talk about Heaven with her. Her face lit up and she smiled a lot when we told her about the huge hug that we were going to give Jesus and Mary when we got there.”

When the COVID-19 epidemic hit Ecuador, her family decided to isolate her, so the sisters could not continue bringing Communion to her. But on March 25, 2020, the Lord gave Mami Lilia a great gift. Father José Javier Martins de Passos, Servant Priest of the Home of the Mother, celebrated Holy Mass in her home. She went to Confession and received Holy Communion and Anointing of the Sick. At the beginning of June when activities resumed, the Sisters brought Communion to her every day. They found her very weak and thin. The external tumors around her neck and aorta had worsened. Morphine had almost no effect. She had grown a lot worse.

On the day she died, June 22, 2020, the Sisters asked Carlos Santos—doctor and member of the Laity of the Home of the Mother who was in Chone at the moment—to visit Mami Lilia, who had had a heavy hemorrhage that morning. Carlos did a complete examination, cured the external tumors and, unable to do more on a medical level, prayed the Chaplet of Divine Mercy with her. When he finished, he said to her, “Lilia we are almost at the end. Are you ready?" She replied, "More than ready."

That same night, D. Ángel, who was in the next room, heard Mami Lilia asking for help. He entered the room and surprisingly found her standing, but she collapsed in his arms. The kids came in and helped lay her down, but she did not respond anymore. It was eight in the afternoon on Monday, June 22, 2020.

We ask the Lord that the words of Psalm 16 be fulfilled in Mami Lilia: "When I awake, I shall be satisfied with beholding thy form." We also pray that this woman of faith may be reunited with her daughter, Jazmina, in Heaven and with Sr. Clare, Mayra, Maria Augusta, Valeria and Catalina.

To get to know Mami Lilia better, you can watch her testimony on HM Television's "Witnesses to Hope" (in Spanish).