The First Book About Sr. Clare

This past September 8, the feast of Our Blessed Mother's Nativity, was the tenth anniversary of Sr. Clare Crockett’s perpetual vows, "her wedding," as she said with so much joy. On the occasion of this event, EUK Mamie Foundation has published the first biography about her life, entitled: Sister Clare Crockett: Alone with Christ Alone, written by Sister Kristen Gardner, SHM, who was also responsible for the production of the documentary All or Nothing: Sister Clare Crockett. The book was released today, September 14, the Feast of the Exaltation of the Holy Cross.

The book can be purchased here:

Information on the Spanish version of the book is available here. 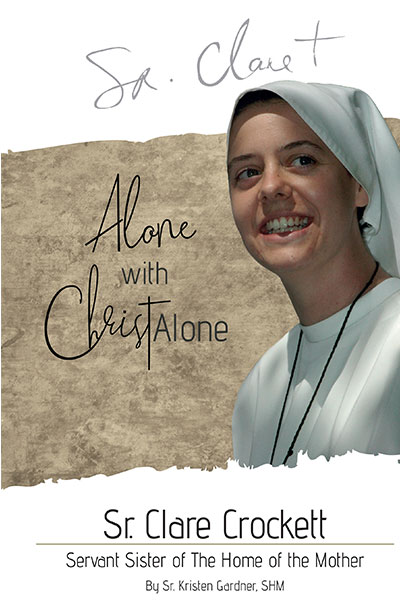 This Wednesday we will be broadcasting online an official presentation of the book Sister Clare Crockett: Alone with Christ Alone. The presentation will be hosted by Sr. Grace Silao, SHM, and Sr. Kelly Pezo, SHM, well known for their testimonies in the documentary All or Nothing: Sister Clare Crockett. Sr. Kristen Gardner SHM, the book’s author, will also be present to respond to the questions that the spectators can make on the YouTube Chat. The broadcast can be followed live here: https://www.youtube.com/watch?v=_HoAk3xzuy4

When Sr. Clare left her country to give her life to God in the Servant Sisters of the Home of the Mother, she said, "No one could believe that God would call a girl like me.” And yet, God, in his sovereign freedom, did call her. Moved by his grace, she responded wholeheartedly and gave her life unreservedly. This is the story that will be told in this book. Sr. Kristen Gardner points out in the introduction: "This book is far from being a complete biography. Only four years have passed since Sr. Clare’s death and there are yet many, many testimonies to be gathered. I hope, however, that it will permit all those who have heard about her death and watched the documentary All or Nothing to get to know her better. Even those who knew her personally will learn a lot about Sr. Clare, just as I have.”

Through this book, readers will discover the meaning of the motto that Fr. Rafael Alonso, founder of the Home of the Mother, gave her when she took her perpetual vows and titles the book: Alone with Christ Alone. Sr. Kristen adds that although the documentary All or Nothing: Sister Clare Crockett could give the impression that our sister was a saint from the moment of her conversion, in this book "readers will discover the spiritual battles Sr. Clare fought as the Lord transformed her progressively. Throughout her life as a Servant Sister, Our Lord would continue to reveal to her, sometimes in solitude and darkness, who she was and who He was. Her encounters with Christ alone gave her the strength to generously surrender her entire self to Him, for the salvation of souls, especially those of young people, culminating finally in her definitive encounter with Christ alone."

The young Clare Crockett, whose greatest aspiration was none other than to parade on the Hollywood’s red carpet, left all her dreams aside one Good Friday after an encounter alone with Christ Crucified. At age 17, the Lord transformed her soul and she no longer yearned for anything other than to have Christ as her only love. She consecrated herself in the Servant Sisters of the Home of the Mother, and gave herself with absolute generosity.

Her overflowing joy led many souls, especially young people, to discover that true happiness is found exclusively in God. Her coherence of life and her total surrender in the different apostolates she carried out in Spain, the United States and Ecuador effectively conveyed the message that only God can satisfy our hearts.

In April 2016, an earthquake hit Playa Prieta and caused the house of the Servant Sisters to collapse. Sr. Clare, in that moment, had her definitive encounter with Christ Alone.