Tomorrow is April 16 and it will be four years since Sr. Clare passed away together with María Augusta, Mayra, Jazmina, Catalina and Valeria in the earthquake in Ecuador.

It still seems like a dream sometimes when we remember everything we went through during those two sleepless nights as we were waiting for the feared news. But, as time has gone by, we have certainly seen the words of Psalm 126 come true: “Those who sow with tears will reap with songs of joy.” We wept as we said goodbye to Sr. Clare and, four years later, the Lord continues to show us the great fruits He is reaping through her life offering, given to Him with so much generosity. We have received countless emails and messages over these last years from people who have come to know Jesus Christ through the life of Sr. Clare: so many conversions; so many religious vocations that have been saved thanks to Sr. Clare’s example; so many souls that have found the strength to say “yes” to God’s plan for their lives after being encouraged by Sr. Clare’s contagious joy. Every week we publish a few samples of the endless stream of messages on the website https://www.sisterclare.com/en/.

Tomorrow is the fourth anniversary of Sr. Clare’s death and to give thanks to God for the example she has been to us, we have two gifts for all of you. The first one is an online Festival that you are all invited to.

Our community of Servant Sisters in Jacksonville are going to be your presenters. Sr. Grace, one of the main interviewees in “All or Nothing: Sr. Clare Crockett” is in Jacksonville, along with Sr. Kelly Maria Pezo who was in Ecuador at the time of the earthquake. They will connect live with Sr. Kristen Gardner, producer and editor of the “All or Nothing” documentary, who is currently writing Sr. Clare’s official biography. The Sisters will be sharing many episodes from Sr. Clare’s life, singing songs and revealing some of her unpublished writings. They will also be available through the chat in YouTube to answer any questions you might have.

In Spanish: “Sr. Clare’s Anniversary Festival” will take place at 5 in the afternoon in Spain for all of our Spanish-speaking viewers, 10:00 in the morning in Ecuador. It will be broadcast through the Home of the Mother YouTube channel in Spanish. If you subscribe to channel, YouTube will send you a notification as soon as the event begins.

In English: “Sr. Clare’s Anniversary Festival” will take place at 6pm in Ireland for all of our English-speaking viewers, 1pm EST in the United States. It will be broadcast through the Home of the Mother English YouTube channel. If you subscribe to channel, YouTube will send you a notification as soon as the event begins.

And what is the second gift that we are going to give you for Sr. Clare’s fourth anniversary?

At 8pm in Ireland we will broadcast a “Special Anniversary Video” through the same YouTube channel mentioned above. In response to the many petitions we have received from people telling us that the best part of the documentary “All or Nothing: Sr. Clare Crockett” is being able to see her and listen to her, we’ve prepared a 4-minute video clip of unedited footage of Sr. Clare. We will once again be able laugh, sing and listen to this sister who has become the close friend of so many people around the world. The video premiere will be available through this link at 9pm tomorrow.

Don’t miss this opportunity to spend more time with Sr. Clare and make sure to invite all your contacts!

May Our Heavenly Mother bless you all 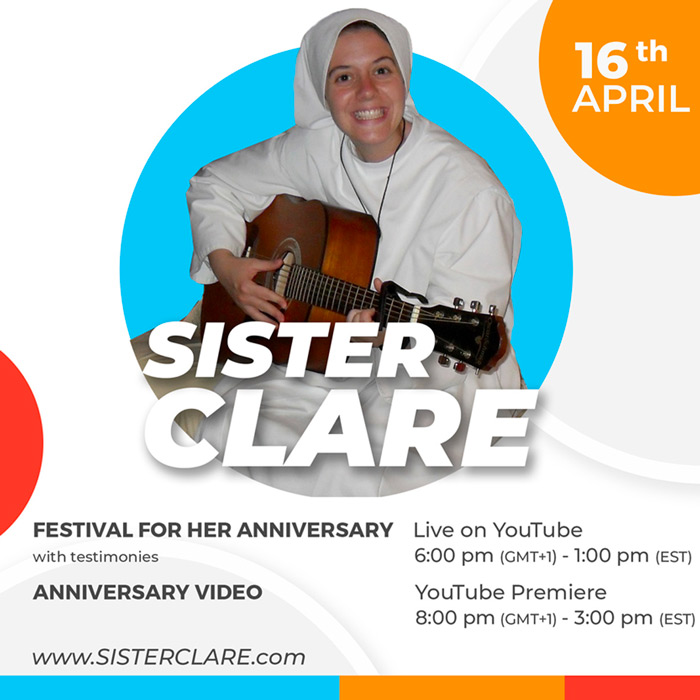