All or Nothing in France: An Interview with Damián Sánchez

Her story moved me from the start, and I saw how in Spain the people who watched the movie were also touched. So I said to myself, “Why not make her known in France where I live?”

Damián Sánchez is a lay member of the Home of the Mother and the coordinator of a generous group that made the French translation and subtitles for All or Nothing: Sr. Clare Crockett. The first fruits are beginning to show after the premiere in Nantes of this film about the conversion and surrender to Jesus Christ of this Servant Sister, deceased at 33 in Ecuador on April 16, 2016.

-     Damián, you never met Sr. Clare. What inspired you to bring Sr. Clare’s life, through the documentary All or Nothing, to France?
I met her through the movie and testimonies about her as well as through the graces we believe many people are receiving through her intercession. Her story moved me from the start, and I saw how in Spain the people who watched the movie were also touched. So I said to myself, “Why not make her known in France where I live?”

-    When did Sr. Clare’s documentary film premiere in France? How is news about it spreading?
It premiered in May at the Holy Bishops of Nantes Parish. We told priests about her and spoke about her to youth and vocation ministries in France and to SAJE, the distributor of Catholic movies. Several priests were very excited about the film. They consider it an extraordinary evangelization tool for our times.

-    SAJE Productions, the great name for Catholic cinema in France, showed interest in All or Nothing. How is SAJE supporting the distribution of All or Nothing in France? 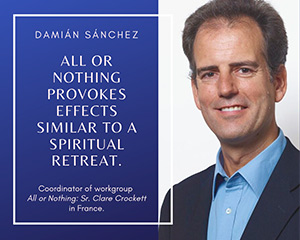 They sent a newsletter about the movie to their 35,000 contacts in France, Belgium, Switzerland and Canada, which is making it known. In January, it will come out on DVD. All of this gives the movie a great deal of credibility, because SAJE is known for the quality of its movies by Catholics throughout the world.

-    What has been your personal experience when you saw Sr. Clare’s movie?
It has helped to flee from lukewarmness and seek always the complete gift. The movie is a catechesis in itself and provokes effects similar to those of a spiritual retreat.

-    Do you think that this documentary can be an evangelization tool?
It already is. These two testimonies confirm this fact:

“Thank you for the movie! I’ve seen it twice and I talked about Sr. Clare last Sunday in my homily at Mass. It is a beautiful testimony!” Fr. Vincent +

“I showed the movie about Sr. Clare to my students (ages 14-16). It made a deep impression on all of us. I was becoming discouraged as a teacher with such difficult and dissipated students. I am going to ask Sr. Clare to help me do my job like her: joyfully and with total surrender.” Aline

-    What are the reactions of the people who see All or Nothing in France?
Sr. Clare’s overpowering testimony touches them deeply. Nowadays people talk about the scandals and infidelity in the Church. A testimony like Sr. Clare makes us wake up from the nightmare we are going through. God is more present than ever in his Church. This testimony, recent and popular, is an example. After watching the movie, people talk about it and write us asking for the DVD.