Several thousands of people throughout the world have seen this documentary film in Spanish, English and Italian over the past months. They have cried, laughed, prayed and sung with Sr. Clare but above all, they have asked themselves, “Lord, am I giving You everything You want of me?”

On April 16, 2018, the second anniversary of Sr. Clare’s death in the earthquake of Ecuador, HM Television released All or Nothing: Sr. Clare Crockett. This documentary tells about the life of Sr. Clare through testimonies from over eighty people who had interacted with her during different periods and circumstances of her life. It begins with her childhood years in Northern Ireland, her dreams of becoming a world famous actress, and her first professional successes until her conversion at the age of 17 following an experience before the Cross on Good Friday in the year 2000. The experience led her to cry out, “He died for me. He loves me! Why hasn’t anyone told me this before?”

Several thousands of people throughout the world have seen this documentary film in Spanish, English and Italian over the past months. They have cried, laughed, prayed and sung with Sr. Clare but above all, they have asked themselves, “Lord, am I giving You everything You want of me?” This is exactly what happened to Josephine Chee Xin Yuan who wrote us from Malaysia to say, “Sr. Clare inspires me to be courageous regarding my vocation. It is worth it if it is for Him. Finding out about Sr. Clare has been a “God-incidence,” because it was right when I was trying to escape from my calling. The more I fled, the more I desired it. Sr. Clare’s example gives me strength and perseverance to answer His call. It does not matter how hard the way of the Cross may be. I’m going with Jesus—joyfully!”

On November 14, 2018, the day on which Sr. Clare would have turned 36, we published the Spanish and English versions of “All or Nothing: Sr. Clare Crockett” on YouTube and put the DVD up for sale. The DVD contents include: 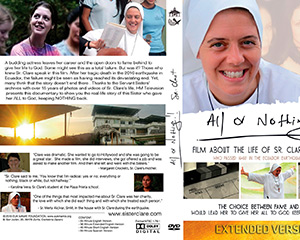 The extended version will allow you to get to know Sr. Clare on a deeper level and features testimonies never before seen. The short version is suitable for situations in which time does not permit the viewing of the entire documentary, such as screenings at educational centers, parish catechism settings, or any other events in which time is limited. To see the dedication and evangelical radicality that Sr. Clare lived, keep spreading the desires that burned in her heart: “I wish to love God with all of my heart. I want Him to be everything for me. This is what I tell Him.”

You can purchase the DVD on Foundation EUK Mamie—HM Television’s website.

You can also view the documentary film on YouTube.