More than 80 people attended and were very touched by it – so much so, that when the documentary ended, there was a river of tears. 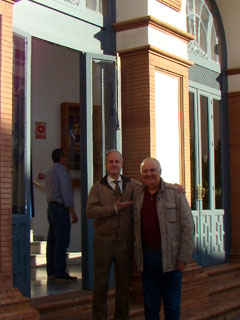 On April 16, 2018, the film about Sr. Clare was released in the Teatro Gutiérrez de Alba in Alcala de Guadaira, Seville, Spain. More than 80 people attended and were very touched by it – so much so, that when the documentary ended, there was a river of tears. We had to mop between the armchairs, ring out sleeves, etc. As you can see, the “Andalusian exaggeration” was contagious!!

Well, on a more serious note, it impacted all of us very much. When it finished, there was a silence similar to what follows the movie The Passion. Everyone thanked us and insisted that they like it a lot. Three Daughters of Charity were there and when they left, they said, “You have a holy Sister. Her life is amazing.”

Patricia told us that it was a documentary that conveyed values that people need to hear. A young university student, Cayetano, commented that while he was watching it, he reflected on his own life, and compared it to Sister Clare’s. Javier, the father of one of the girls that comes to our get-togethers, said, “that’s what the life of the saints is like.” Milagros, mother who just lost a daughter in a car accident, said that she left “with a lot of peace.” Pilar told us that it touched her a lot and that Sr. Clare conveyed something that she could not explain, but was “like magic.” She asked us to let her know if we were going to put on another showing of the documentary, because she wants to see it again and also wants her two daughters to see it.

Many others left in tears and unable to say anything, but very grateful for the invitation to watch it. Blessed be God for all the good He is doing though our Sister!

Servant Sisters of the Home of the Mother
Community of Alcala de Guadaira, Seville, Spain