On the 2nd anniversary of Sr. Clare’s death, the community of Servant Sisters in Roscommon and three sisters from the community in Spain went to Derry, Sr. Clare’s hometown, for the showing of the film “All or Nothing.”

Preparations for the showing began on Saturday, April 14th with the distribution of posters throughout all of Derry announcing the movie.

At last, April 16th, the long-awaited day, finally arrived. We invited whoever wanted to come to pray a Rosary at Sr. Clare’s tomb. There were people from all over: children and young people, members of Sr. Clare’s family and people we did not even know. We prayed the Rosary together with songs between each mystery. 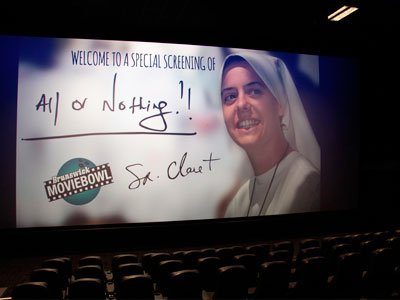 The movie began at 6:00 PM, but the doors opened at 5:00 PM. Of the 300 seats in the movie theater, 150 were reserved for members of Sr. Clare’s family and people close to the family. One of the sisters talked before the movie started to thank the people for coming and to tell a little bit about Sr. Clare.

Nobody moved during the whole movie. Since many of the people there knew Sr. Clare personally, they really enjoyed the movie. When it was over they gave a standing ovation.  After the movie, the sisters talked to the people asking them what they thought about it. Many people were so impressed by what they saw that they couldn’t even talk. For some, the movie was like an examination of conscience. A child said that after seeing the movie he wanted to start praying the Rosary with his family. Another young person said that he was excited because he saw that holiness is possible and very real.

On Tuesday, April 17th, we showed the movie in Sr. Clare’s high school, St. Cecilia College, an all-girls’ high school. There, the teachers, the principal, the chaplain, the majority of the students and even students from other schools all came together to watch the movie. They were very happy after seeing the movie. Afterwards, the chaplain celebrated Mass there for Sr. Clare.

After lunch, the sisters went to the classrooms to talk with the girls who were unable to see the movie because they had exams.

That evening at 6:30 PM there was a Mass offered for Sr. Clare at her parish. 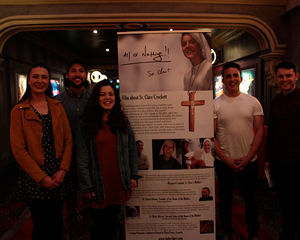 On Wednesday, April 18th, there was a screen reserved for Sr. Clare’s movie in the theatre at 6:00 PM. There were so many people that wanted to see the movie that the owner of the movie theatre asked us if he could put it on another screen. He ended up adding three more screens for a total of four, and the four rooms were totally filled.

The majority of the people did not know Sr. Clare personally, but they had heard about her. They were all very surprised by the documentary and were very moved. Many people said that the movie opened their eyes up to the reality of religious life. Many had a false idea of what a nun is, and the movie helped them to get rid of this false idea.

This documentary not only shows the life and testimony of Sr. Clare but it is an inspiration for all because it shows that holiness is possible, that we are called to a true conversion and to live in the grace of God. This movie was like a spiritual bomb in Sr. Clare’s country. There is no doubt that it will continue to bear much fruit.