The EUK Mamie Foundation, producer of said documentary, along with the community of Servant Sisters, opted for a free distribution of the film to whoever solicited the projection. We only put one condition: that the documentary be shown as an apostolic event. Many parishes, apostolic groups, colleges and universities are taking advantage of this opportunity and we have received many messages from people thanking us for the film and sharing how this film has helped them. This film is available for whoever would like to request it and has not yet done so here.

If you would like more information please visit this link: 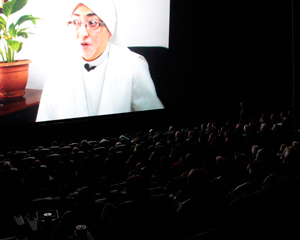 If we were to talk about all the showings of the film, this article would never end, but there are two very special places that we have to mention: Derry (North Ireland), where Sr. Clare was born and is buried, and Playa Prieta (Ecuador), where she died. In these two places, along with other places where the film was screened, the Bishops of the diocese were present and were very impressed and moved by what they saw.

The showing was very emotional in Derry, the birthplace of Sr. Clare. Some even described the film as a spiritual bomb. In the conflictive area of Northern Ireland, many people are starting to see that Sr. Clare’s example can cure and transform many hearts wounded by so much suffering and hate.

In the first projection in Derry, the 300 seats in the theatre were filled to the brim; people were even sitting in the stairwells. Sr. Megan Murray explained: “Every person that left the theatre was deeply touched, and for many, the movie was a serious examination of conscience.” The next day, April 17th, the movie was projected for more than 600 young people in the high school of St. Cecilia, Sr. Clare’s alma mater. These young people were also very impressed by Sr. Clare’s example. On April 18th, another showing in the movie theatre was programmed, but there were so many people that wanted to see the movie that the theatre had to open up four screens. In three days more than 2,000 people had already seen the movie and many were asking for other screenings. Sr. Megan Murray concluded her intervention saying: “It is clear that this movie not only shows the life and testimony of Sr. Clare but it is truly a call to holiness, a call to conversion and to live a life of grace.” The Servant Sisters of the Home of the Mother in the community of Roscommon (Ireland) have prepared a short video with the testimonies of the people who saw Sr. Clare’s movie. You can see the video here: link. 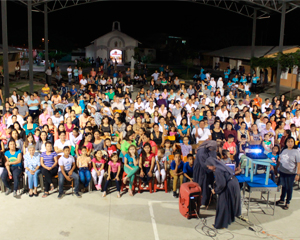 In Ecuador the showing of the film was also eagerly awaited and was projected in multiple parts of the country. However, the most special projection without a doubt was in Holy Family School in Playa Prieta, the place where Sr. Clare died. The sisters wrote saying that it was impressive to see crowds and crowds of people arriving for the film. The covered basketball court filled up right away, a space that seats about 600 people. After the film, the applause from the crowd was explosive, a sign that the people were very impacted by Sr. Clare’s life.

As of today we have received over 800 petitions to show the film, but it is impossible to calculate the exact number of people that have seen it. Behind each petition there could be a small youth group, a religious community in charge of multiple schools in a country, a priest with 10 parishes or a priest in charge of the youth ministry in a whole diocese. One of the latest petitions we received was to bring the film “All or Nothing: Sr. Clare Crockett” to Tanzania on the day of Pentecost, to an event where there will be more than 500 young people.

Many people see the film and are left with this question: “Am I giving everything to the Lord that I have to give?” Others leave saying: “In Sr. Clare’s life, it is not all or nothing, it is all or all” and that is what the Lord is asking of me as well.” We have heard of many fruits after seeing this film, conversions, vocations, people who make serious decisions to change their lives, to give the Lord a little bit more, or a lot more. The Lord in his great mercy transformed what was, humanly speaking, a tragedy into a foundation of blessings. He does this every time we place ourselves in His hands and trust in Him.

See where the next showings are going to be here: here.

May our Lord and our Lady bless you all