Derry Now is a newspaper in Northern Ireland that belongs to Rivermedia, an Irish media business. Derry Now is specialized in news coverage of the city of Derry and Derry County. 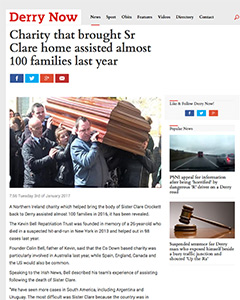 On January 3, Derry Now published an article about the work Kevil Bell Repatriation Trust is carrying out in Ireland. This foundation had been helping Irish families to repatriate the bodies of their loved ones since 2013. Among the ninety eight applications for repatriation received by the Kevin Bell Repatriation Trust in 2016, Sister Clare’s case was chosen to present the activity of the Foundation in an article called, “Charity that brought Sr. Clare home assisted almost 100 families last year.”

Collin Bell, founder of the Kevin Bell Repatriation Trust, confesses that of the ninety eight cases received in 2016, “the most difficult was Sister Clare because the country was in turmoil after the earthquake.”