Are we there yet?

We share a new story from Sr. Clare’s childhood, written for the HM Children’s magazine in 2005. It will surely make you smile and remember trips from your own childhood.

How easy it is, however, to still complain about so many things… the moral of the story is valid for all ages!

"How my poor mother would suffer when we had to go on a long car trip with her! As the three of us were little, we had to sit in the back seat while my mother would drive. It was almost automatic. As soon as the car would start, our little complaining motors were also put into action and the question “Are we there yet?” was like the background music of the whole journey.

No one liked to sit in the middle seat of the car. That’s why we would dive so fast into the car to try and get a window seat. The one who had to sit in the middle spent the first fifteen minutes crying and making excuses, so that she could have the window seat. “I feel sick, I need to sit there,” she would say, or “I saw a big spider beside your seat. If you want, I can swap seats with you because I’m not afraid…” We liked to sit by the window, because if you breathed on the window, you could then draw on the mark that your breath had left on the window. We liked to do that a lot.

We would ask my mother every kind of odd question, as we looked out of the car window. “Mammy, why does that cow have one brown spot and the other has two? Why is there only one man in that car? Why are some peoples’ door painted black and others blue?” When my mother would respond, we would say, “But why? But why? But why?” until my mother, clenching tightly the steering wheel, would say, “Now we are going to play a game I learned when I was little. It is a very difficult game and only very special children can play it...” “We can!” we would exclaim excitedly. “Well, it is a game to see who can go the longest without making a sound, starting... now.” The game did not last long. “Hey, get your arm off my part of the seat.” “No, it’s my part of the seat...” My sisters and I would argue during the trip. One of them used to love to imagine that her legs were drumsticks, so she would spend the whole time banging her legs against the seat and making up songs, repeating the same one over and over again. My other sister and I plugged our ears and sang our own songs until my mother said she was going to stop the car and we would have to get out. 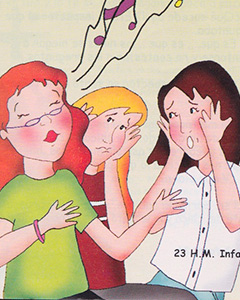 One time, my mother stopped the car and asked us, seriously, “Are you ready to walk? Because I have had enough! You can’t sit together ten minutes without arguing. The next time I hear a complaint, just one word... you are all walking!” Then, she put in a cassette tape of a man who sang super slowly. Finally, with the monotony of his voice, my sisters and I fell asleep.

Girls and boys, how many of us could say that we are “professional complainers”? We complain of the things we don’t have, that we don’t like, and we forget that there is always someone who has to listen to our selfish complaints. And how many times do we argue with our brothers and sisters? We have to pray to the Lord, who is “meek and humble of heart,” that He helps us to be instruments of peace. We should also pray to the Virgin Mary, that she help us to control our temper, so we can be more like her Son."