Alone with the Alone

Sr. Beatriz Liaño, SHM, Spain:  Although there were always children, young people, and adults seeking her company, Sr. Clare managed, in the deepest recesses of her heart, to live  “Alone with the Alone.”

Sr. Clare made her perpetual vows on September 8, 2010 with the religious name: Sister Clare Maria of the Trinity and the Heart of Mary. This year she would have celebrated her seventh anniversary. It is interesting to note that several of her superiors coincide in affirming that Sr. Clare’s perpetual vows marked a before and after in her spiritual life. 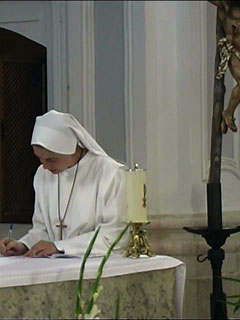 Just a few days after making her perpetual vows, Sr. Clare was sent to a new community of the Servant Sisters of the Home of the Mother scheduled to open in Valencia (Spain). Her superior in that new community, Sr. Isabel Cuesta, recalls, “Sr. Clare had just made her perpetual vows on September 8th of that year. She had surrendered herself entirely to the Lord and her way of living that out was by doing everything wholeheartedly. (…) Obedience was her way of putting this complete surrender to the Lord into practice.”

During that academic year of 2010-2011, Sr. Clare said that the image of a “blank check” especially helped her to realize that every day she had to put her life in God’s hands. Every day, she would offer the Lord a blank check where He could ask of her whatever He wanted. Sr. Isabel insists that after making her perpetual vows, Sr. Clare “understood perfectly what belonging to the Lord meant and lived it out with great generosity and enthusiasm.” 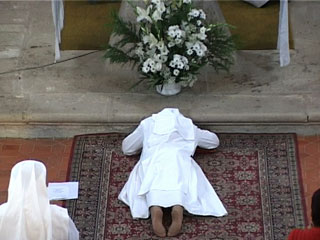 The Litanies of the Saints recited during Sr. Clare’s perpetual vows.

Sr. Mercedes Ramos comments: “I was her superior for several months in Belmonte, but nothing especially stands out in my memory of her during that time. It was later, when years passed and the Lord sent us both here to Ecuador: Guayaquil and Playa Prieta. She had already made her perpetual vows when she came to Guayaquil. She was no longer the same Sr. Clare I had known years before. I would say that Sr. Clare underwent a radical change.” 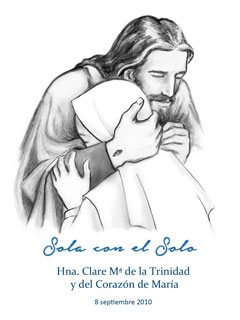 This drawing was a gift from
the Servant Sisters of the Home of the Mother
to Sr. Clare on the occasionof her perpetual vows.

Fr. Rafael Alonso Reymundo, founder of the Home of the Mother, assigns a motto for the group of Sisters making their perpetual vows each year on September 8th. The motto he gave Sr. Clare was “Sola con el Solo” (“Alone with the Alone”). While she was the only sister making vows that day, this motto “Sola con el Solo” had a more profound connotation. Fr. Rafael chose this motto recalling Sr. Clare’s encounter with Christ Crucified on Good Friday in 2000, an encounter that marked the beginning of her conversion which occurred in an intimate moment while she was “alone” with Him. A soul’s encounter with God is never solitude, but rather profound intimacy. It is a call to a greater union and transformation in Him. Sr. Clare responded to the Lord’s nuptial gaze on September 8, 2010, with a complete surrender. Her life became an incarnation of St. John Paul II’s call for all consecrated to live “a transfigured life, capable of amazing the world” (Post-Synodal Apostolic Exhortation Vita Consecrata, 20). Although there were always children, young people, and adults seeking her company, Sr. Clare managed, in the deepest recesses of her heart, to live “Alone with the Alone.” And it was precisely because of this that so many of them could “sense with longing the attraction of divine beauty” (Ibid.).