The Biopsy Showed That There Was No Cancer

Cynthia Bassi, Spain: Not only did the metastasis of a confirmed cancer disappear, but she recovered true life. Glory to God!

Cynthia Bassi, lay member of the Home of the Mother, writes to share a grace that Maria Guadalupe from Mexico has received. María Guadalupe’s mother attributes the favor to the prayers of friends and family, especially those of Cynthia to Sr. Clare.

My dear family in Christ, 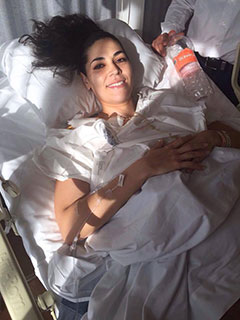 I would like to share something that I heard from a woman named Elia Chapela, a friend of mine from Mexico who has a daughter named Maria Guadalupe. Elia told me about a grace their family received and I would like to share it with you all for the greater glory of God and to bear witness to Sr. Clare’s help to this family.

Elia told me, “A cancer with metastasis, confirmed by medical studies, disappeared. The biopsy showed that there was no cancer. This is a blessing, because the doctors said that it was, in fact, cancer.” An apparently terrible prospect was solved by just one operation and an incredible recuperation. And the most important part of it all was the daughter’s return to grace through the Sacraments. Glory to God! This is undoubtedly the greatest miracle. Elia told me that it had been over ten years since her daughter had gone to Confession or Mass. Not only did the metastasis of a confirmed cancer disappear, but she recovered true life. Glory to God!

Below is the text Elia Chapela wrote me, and attached is the medical test that confirms the cancer and the posterior testimony that it no longer exists, as well as a picture of Maria Guadalupe after the operation:

I write this to make known the amazing experience we have lived as a family. My daughter is a thirty-eight year-old mother, apparently healthy and strong. On December 21, 2016, we went to the gynecologist together. She went for a Papanicolaou test, and I went for other problems.

The doctor, who was very professional, examined her. There was something that he did not like, and he did an ultrasound on her. He asked her to talk to the head of the ultrasound department and to not put it off. She made the appointment for the next day. Not wanting her to go alone, I met up with her for the appointment. The head of the ultrasound department said that there was something wrong and sent her to the specialist, the urologist. He was also very professional and reassured her. He did not tell her anything, but rather sent her to do tests and a CAT scan. The results came on December 24. My daughter arrived with the results and read them to us. This is what the gynecologist wrote: ‘There seems to be a high probability of cancer, but there is no full security. We would like to do a biopsy of the tumor to confirm. In addition, the biopsy will serve to establish the degree of malignancy, as there are some types of cancer that are not as aggressive. We can not cling to great hope, but it still exists. I send you my regards.‘”

That afternoon, the doctor was very happy because he had good news. He said that the cancer had not affected other organs, and that on Wednesday he would intervene to remove the entire tumor and a sample of tissue from her kidney, to be able to examine it. That definitely calmed us down, and we gave thanks to God and Our Blessed Mother. Days later, I wrote to the doctor, "Doctor, my daughter was discharged from the hospital today. In all of this we have seen an overabundance of the Mercy of the Lord, right from the very beginning, for leading us to you. God bless you". The tumor weighed 3 kilograms; (6.6 pounds) even more than the babies my daughter had given birth to.

From the biopsy of the tumor, it turned out that there was no cancer. This was truly a blessing, and the doctors agreed. But it was not “free”. My daughter went to the Basilica of Our Lady of Guadalupe to go to confession before the operation. The priest prayed for her operation, and she received communion and prayed to Our Mother. Also, my sister in Christ, Cynthia Bassi, asked many people around the world to pray for María Guadalupe through the intercession of Sister Clare. Those prayers were very effective because we experienced the abundance of blessings and the health of my daughter. We can’t thank the Lord enough. God put all of these good people on my path to help me.

Of everything I sent you, take what you want to share, and tell me if I missed something, please. The conversations were with the gynecologist, who wrote me every day, asking about my daughter, because he was very worried. He went to see her, and every day he called the hospital to ask about her health.

United in Jesus and Mary!