Ana Isabel, Madrid (Spain): If the baby was a girl, Miguel would have been called “Clara,” but since he was a boy, I couldn’t call him “Claro.”  In spite of the fact, Miguel bears her mark.

Ana Isabel Jimenez Murcia got to know Sr. Clare before her conversion and suffered greatly from her death, which coincided with a moment of great suffering for her: the discovery that one of the babies she was expecting was extrauterine and an internal hemorrhage was threatening the life of the other baby she was expecting. 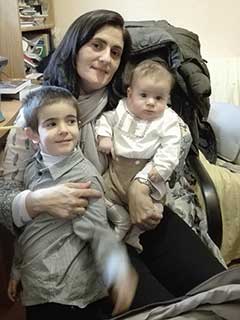 I was lucky enough to have known Sr. Clare from the time she came to Spain during her first Holy Week, before she had converted. Afterwards, I kept in touch with her throughout her vocation and surrender as a Servant Sister of the Home of the Mother. She had a very open, explosive, and joyful character. I agree with everything that has been written about her, and what the Sisters have said about how she was.

Today, however, I would like to write because of a very personal experience I contribute to her. In particular, it has to do with my last pregnancy. I’m married and have five children. I also have one in Heaven already.  During my last pregnancy (they were twins), I suffered an internal hemorrhage because one of the babies was implanted in the fallopian tube. We discovered it shortly after having found out about the earthquake in Ecuador, and so I also lived my own earthquake.

The earthquake affected me a lot because I loved Sr. Clare like a sister, and just like any other sister, of whom you ask prayers, I entrusted my pregnancy to her. I could have lost not only my extrauterine baby, but also my little Miguel who, thanks be to God, is with us today. I was on bed rest for three weeks, because of an emergency operation that I had to undergo due to the internal hemorrhage. I know Sr. Clare helped me a lot. If the baby was a girl, Miguel would have been called “Clara,” but since he was a boy, I couldn’t call him “Claro.”  In spite of the fact, Miguel bears her mark. Thank you so much, Sr. Clare!!