Sr. Clare's Biography Given to Both Popes

Pope Francis listened attentively as Br. Carl explained what had happened in the earthquake.

The community of Servant Brothers of the Home of the Mother in Rome delivered the biographies of Sr. Clare and the five young women that died in Ecuador on April 16, 2016, to both Pope Francis and Pope Emeritus Benedict XVI. In this article they share their experience and reflections. 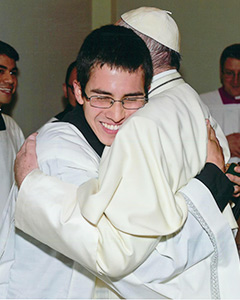 Everything began when Fr. Jose Tola, a priest of the movement “Sodalitium of Christian Life,” invited two of us Servant Brothers of the Home of the Mother in Rome to serve as acolytes in St. Peter’s Basilica for the feast of Our Lady of Guadalupe on December 12, 2016.

We had served as acolytes at the Easter Vigil the same year, and therefore knew that it would be an immense grace, not only because it is a beautiful liturgy, but because in the sacristy, at the feet of Michelangelo’s Pieta, we would be able to personally greet Pope Francis for a few moments. Br. Carl did not lose the opportunity. Remembering that Our Lady of Guadalupe is Patroness of the Americas, he felt that Our Lady was giving him the opportunity to give the Holy Father the biographies of our six sisters, Sr. Clare, Maria Augusta, Jazmina, Mayra, Catalina, and Valeria, who left this world during the earthquake in Ecuador on April 16, 2016.

Br. Carl presented the biographies and a letter signed by the four Servant Brothers in Rome to Pope Francis, who listened attentively as Br. Carl explained what had happened in the earthquake. We knew that Pope Francis had heard about Sr. Clare, and had even commented to some cardinals on that “courageous nun” who gave her life in Ecuador. 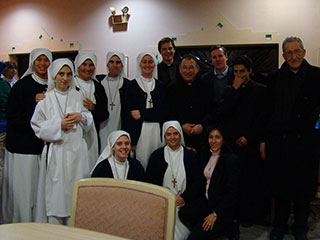 A while later, we thought that surely Pope Emeritus Benedict XVI would like to know the sisters’ story, because the earthquake had taken place on his birthday, April 16. We asked one of our professors and he offered to have it reach him through the Holy Father’s secretary, a close collaborator of his. Together with the biographies, we sent him an article, written by Sr. Kristen Gardner, about Sr. Clare’s stay in Rome during the conclave in which Pope Benedict was elected. In that moment our sister was just another face among the crowds of people. Benedict XVI could not have known that such a generous soul like Sr. Clare was there, supporting the new Pope with such enthusiasm. She was praying, yet not knowing that the Pope would be Cardinal Ratzinger, for his election. Reading those pages, he might be comforted knowing that, as she prayed for him in his election as pope, Sr. Clare remained close to him in prayer and sacrifice during his entire pontificate.