After a brief career as a presenter and actress, she became a religious sister in the Sister Servants of the Home of the Mother in 2001, taking final vows in 2010.

IMDb.com is at present the most popular and authorized source in the world for information related to films, television programs, and celebrities. It has an average of 250 million visits each month, and their Facebook and Twitter accounts are followed by over 10 million fans. 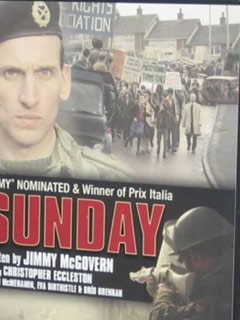 In its actor database, we can find Sr. Clare's profile, under her stage name, “Clare Crockett.” It was actualized after her death in the earthquake in Ecuador on April 16, 2016. This is what IMDb.com says about Sr. Clare:

Clare Crockett was born in Londonderry in Northern Ireland. After a brief career as a presenter and actress, she became a religious sister in the Sister Servants of the Home of the Mother in 2001, taking final vows in 2010. Missioned to Playa Prieta in Ecuador she was a music teacher at Holy Family College and was killed with five postulants as they attempted to escape from a building during the earthquake that devastated the region in 2016.

Through her biography in www.IMDb.com we can find out some details about the movie that Sr. Clare acted in, Sunday, directed by Charles McDougall: Sunday tells the story of an infamous day in Derry/Londonderry, Northern Ireland on Sunday 30th January 1972 a peaceful civil rights march against internment (imprisonment without trial), organised by the Northern Ireland Civil Rights Association (NICRA) ended with 13 marchers shot dead and 15 wounded. It became known throughout the world as Bloody Sunday.