In the BBC: The First Anniversary of Sr. Clare's Death

To think that a year on people are still writing about her is unbelievable.

The BBC is certainly one of the best known broadcasters in the whole world. The "British Broadcasting Corporation" is a public service broadcaster of radio, television, and internet in the United Kingdom. 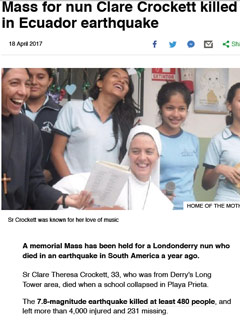 This past April 18, 2017, the BBC published an article entitled: "Mass for nun Clare Crockett killed in Ecuador earthquake." The article begins by making reference to the memorial Mass celebrated in Derry the day before on the first anniversary of Sr. Clare's death. It gathers the declarations of Shauna Gill, Sr. Clare's sister, who showed her emotion at the fact that, after a year, people's interest for Sr. Clare is still alive: "To think that a year on people are still writing about her is unbelievable."

You can see the entire article by going to this link: http://www.bbc.com/news/uk-northern-ireland-foyle-west-39627149