She Gave Everything to the Lord

Guadalupe Cedeno Ruiz, Ecuador:  She used to say that it was a time in which she gave Our Lord everything, everything. She gave everything up for Him, and it was noticeable.

Guadalupe Cedeno Ruiz is from Playa Prieta in Manabi, Ecuador, and is a candidate in the Servant Sisters of the Home of the Mother. Mayra’s form of self-giving made a big impression on her. 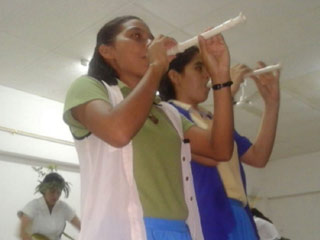 When Mayra entered as an aspirant, she received a huge grace. It was as if she saw what Our Lord asked of her. From that moment she gave of herself entirely. She used to tell her story and would say that the most beautiful time that Our Lord had given her, in spite of the fact that she had denied Him so much, was when she entered as an aspirant. She used to say that it was a time in which she gave Our Lord everything, everything. She gave everything up for Him, and it was noticeable.

I remember that we went to the beach on one occasion. She was still an aspirant and told her vocation story. All of us sat together talking, and she said that she had never been as happy as when she was able to take that little step. It surprised me a lot because she was always ready to do whatever God wanted of her. She never asked when she was going to enter as a candidate, but said, “I know that this is what God wants of me now.”

Published in Memories of Mayra
back to top