Sr. Clare in the Catholic Herald

Fr. Roland Cahoon seeks to answer the mass media’s questions. They wanted to know who Sr. Clare was directly from someone who had known her first hand.

The Catholic Herald one of Great Britain’s principal publishers. On April 18, 2016, the weekly published an article titled, “Nun from Derry killed in Ecuador earthquake.” 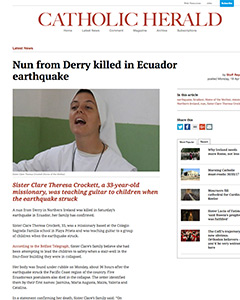 Having received the news, Sr. Clare’s family asked the mass media to respect their suffering and need for privacy in the first moments. Therefore, Fr. Roland Cahoon, an Irish priest, who had helped Sr. Clare a great deal in her discernment before entering the community, sought to answer the mass media’s questions. They wanted to know who Sr. Clare was directly from someone who had known her first hand.

Fr. Roland Cahoon describes Sr. Clare as “a beautiful person” who “died for the Gospel,” and affirmed, “I’ll remember the joy that she brought to her youth group and the enthusiasm she showed for her vocation to religious life. It’s counter-cultural to join a religious order for a young girl and she embraced it. We’ll remember her with such affection.”

You can read the complete article here:  http://www.catholicherald.co.uk/news/2016/04/18/northern-irish-nun-killed-in-ecuador-earthquake/