On April 19, 2016 Chinatimes.com declared that "one of the victims was a religious missionary from Northern Ireland, named Sr. Clare Crockett.”

Chinatimes.com is one of the most influential means of communication in Taiwan and is a necessary reference to learn about the latest news in Chinese. 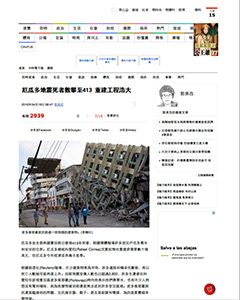 On April 19, 2016 they published an article evaluating the damage suffered during the earthquake in Ecuador. The articles states: “The death of two Canadians, Jennifer Mawn and her 12-year-old son, Arthur, has been confirmed. The United States also confirmed the death of one U.S. citizen, and the United Kingdom declared that one of the victims was a religious missionary from Northern Ireland, named Sr. Clare Crockett.”

If you would like to see the original article in Chinese, you can do so through this link: