Sr. Kristin Maria Tenreiro, SHM:  Steven began to intensify his prayers, asking God to grant him and his wife the grace to be able to have another child through Sr. Clare's intercession.

Sr. Kristen Maria Tenreiro tells us about a grace received by Steven McCourt, native of Derry , neighbor and childhood friend to Sr. Clare.  After the death of his daughter, Erin, shortly after her birth, his wife was unable to become pregnant again.  After praying to Sr. Clare, they are able to embrace a new baby today that was born safe and healthy this past February 21, 2017. 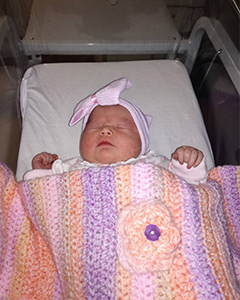 Steven McCourt is from Derry, Northern Ireland. He lived on the same street as Sr. Clare and was childhood friends with her. When he heard that Sr. Clare had died, he wrote to the Servant Sisters of the Home of the Mother to express his sorrow for the tragic news. On June 6, 2016, Steven again wrote asking for prayers, since he and wife both deeply desired to have another child, but were unable to conceive. They have an 8-year-old son named Oisin Pio, but had lost their dear daughter Erin after the last pregnancy on the same day she was born. 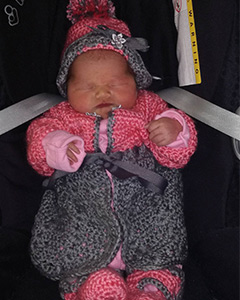 Steven began to intensify his prayers, asking God to grant him and his wife the grace to be able to have another child through the intercession of Sr. Clare. Two months had not pass by after he began to pray when, on July 28, 2016, Steven wrote with very good news: his wife was pregnant! While they waited for the long-awaited day to arrive, they lived days of great stress and fear due to the previous experience of the birth and premature death of Erin. They intensified their prayers even more.  We Sisters also joined them in prayer, asking for Sr. Clare to intercede for a healthy pregnancy. On February 21, 2017, thanks be to God, Peárla Clare was born, safe and healthy!