Together, We Do Each Other Good

Julissa Macias, Ecuador:  Even though she was not a girl who called attention to herself, she was an example of abandonment to God’s will. She tried to respond promptly to what Jesus asked of her.

My name is Julissa Macias, and I am a candidate of the Servant Sisters of the Home of the Mother. I am twenty years-old and lived with “Cieli,” as we used to call Maria Augusta. When I met her, they told me that those closest to her called her Cieli. So I called her Cieli, a little piece of heaven, because of her shining eyes. She would say to me, “Don’t call me that. I don’t like it. I don’t like when they call me Cieli.” Last year, I started to call her Maria Augusta because I had heard her say that she did not like to be called Cieli. Then she told me, “You can call me Cieli, instead of Maria Augusta, because if not, it seems like you are mad at me.”

I lived with her for almost three years in the Home of the Mother Student’s Residence in Portoviejo. She was a girl who liked to dress well and smell good, to match in whatever was possible, and her hair was never without conditioner... She was not extremely into these things, but it is true that she liked to fix herself up. She did not like to sweat. She was a nice, sweet girl, although reserved and shy.

I think she was a girl whom God spoke to often, and she could not flee from his voice. I remember one day I was teasing her and I asked, “When are you going to enter the Servant Sisters?” She asked me why I said that, and I answered that it was written on her face. Then she said, “I’m just very afraid to let the Lord down, but I am doing what I can to do what He asks me.”

Unexpectedly, Our Lord asked her to be the responsible of the Residence, which was a hard step for her. She did not like the fact that we had to go to her with questions and much less having to correct us. Honestly, that was her cross. If she would have been able to avoid it, she would have, but she knew very well that it was Jesus who asked her to do it. 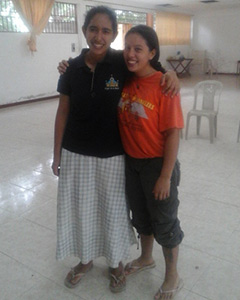 She had a very strong relationship with Our Lord. She liked to call him “Jesusito” [a diminutive of Jesus]. She loved the Virgin Mary, too, but had a harder time in her relationship with Her. She liked the song, “Tomad Virgen pura” [Take, Pure Virgin] because it helped her to unite herself more to Our Lady. She once told me that she wanted to have a very close relationship with the Virgin Mary, because a group of girls that she looked up to had a close relationship with Her. I remember that one evening, on a day in which we had already gone to Mass, while we were waiting for the rest of the girls. She proposed that the two of us pray the Rosary with songs between the mysteries. We thought that the Virgin Mary would like it a lot. We also laughed imagining Mary and Jesus smiling at how awfully we sang. It was a special Rosary.

Cieli was very helpful, even if she was in a hurry. There was a time when I asked her to teach me how to cut a chicken. In spite of the fact that she had little time, she did it. That’s when I learned how to do it, thanks to her patience.

Cieli did not like to be angry with anyone, and when something did not go right, she tried to resolve the problem. Once, the two of us were going through a rough situation, so she wrote me a note that said, “Hey, you little trouble-maker. The devil is getting between us quite a lot. He knows that together, we do each other good and is trying to separate us. I’m sorry for getting impatient; I don’t want that to be the reason for you to leave the Residence. Seriously, you shouldn’t even think about those things. Later! I’m going to Chone. See you on Sunday or Monday. Sincerely, Maria Augusta.” She always tried to find a solution for conflicts however she could. She was a girl who knew how to win people over. She was always attentive to make sure that we were ok.

Something else that I remember is that when she entered as a candidate, it was very hard for her to let go of her clothes. She gave me a part of her clothes, and when she gave them to me she said things like, “Take good care of it, it’s my favorite shirt,” or, “Here, I like these pants a lot.” She also had shoes and a headband that she loved, but she knew how to give them up for Our Lord with joy. Everything that she did was out of love for souls and because she knew that it would make Jesus happy, such as being a camp monitor, leading a girls’ group discussion, encouraging girls who needed it... Even though she was not a girl who called attention to herself, she was an example of abandonment to God’s will. She tried to respond promptly to what Jesus asked of her.