The Belfast Telegraph is without a doubt the highest circulated newspaper in Northern Ireland. It is important to note that this newspaper is known for being very secular, so it is not easy to find articles favorable to the Catholic Church. However, when articles are published about Sr. Clare, they are full of respect and appreciation, to the point of saying that she is "the true face of Northern Ireland."

According to the publication, Carol Toner is a retired teacher who, amazed and inspired by Sr. Clare’s story, organized a pilgrimage to embark on the epic 500-mile Camino Way to Santiago in Spain. Carol says, "I was very moved when I heard that a young nun from here had died in the earthquake in Ecuador." 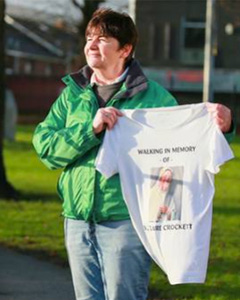 The objective is to turn this pilgrimage into a fundraising campaign for the reconstruction of the "Sacred Family Educational Center,” the school where Sr. Clare died in the earthquake in Ecuador on April 16, 2016. Carol Toner knows that there is still much to do at the school, and she wants to contribute her grain of sand in this way. She has already prepared the official pilgrimage t-shirts of the pilgrimage, with a photo of Sr. Clare printed on them, as you can see in the photo accompanying the Belfast Telegraph article.

You can read the article here: