COPE: “She Gave up an Acting Career in Order to Serve Others”

Cristina Lopez Schlichting, well-known Spanish journalist, dedicated part of her program “Fin de Semana” (“Weekend”) on the COPE channel, to Sr. Clare Crockett, affirming that: “She gave up an acting career in order to serve others.”

You can listen to the audio of Cristina Lopez Schlichting and a written summary of the program (in Spanish only) by visiting the following link:

She also makes references to Sr. Clare’s testimony on her personal Facebook page. 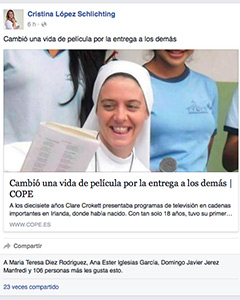 Cristina Lopez Schlichting currently directs the program “Fin de Semana” (“Weekend”) on the COPE channel, contributes to two columns in “La Razón” (“The Reason”), and is host on 13 TV. She has collaborated on Antena 3, Telecinco, RTVE, Telemadrid, Cuatro, and Intereconomía.  She is autor of the books: “Políticamente Incorrecta” (“Politically Incorrect”) and “Yo viví en un harén” (“I Lived in a Harem”).

The following is a translation of the written summary.

“She Gave up an Acting Career in Order to Serve Others”

From the time she was sixteen years old, Clare Crockett was presenter of several programs on important television channels in Ireland, where she was born. At the age of only eighteen years old, she played her first role in a movie.  Her wild and social character led her to spend every weekend going out to clubs with her friends and getting drunk uncontrollably.

However, one day her friend proposed something that would change her life forever: to go to Spain for free during Holy Week. It was a pilgrimage to a monastery with religious Sisters from the Home of the Mother. When she realized where she was going, she tried to cancel, but the tickets were already in her name. As she herself described it, it was on that trip that she felt the Lord question her deep within her and the phrase: “What am I going to do for Him?” was left deeply impressed in her soul.

Shortly afterwards, she went on a pilgrimage with the same religious Sisters.  Something began to change within her.

Her next life-changing episode occurred in such an unexpected place as the bathroom of a club. It was there that Jesus Christ asked her, “Why do you keep hurting Me?” That question hovered over every one of her steps.

Clare made what would be the great decision of her life: offering herself to God and forming part of the community of religious the Servant Sisters of the Home of the Mother. The decision made her deeply happy. As she herself said, she felt very impressed by the way that God works in souls and how He can transform a person’s life and conquer his heart.

Over the years, Sr. Clare was sent to one of the three communities that the religious Servant Sisters of the Home of the Mother have in Ecuador. There, the cycle of joy continued. Her presence alone filled the life of the community and all those who drew close to her.

Among the victims of the April 16th earthquake in Ecuador, were five young girls that were found in the Servant Sisters of the Home of the Mother’s house in Playa Prieta – among them, Sr. Clare Crockett, 33 years old.