The Lord is Pursuing Her

Sr. Nathaly Vera, Ecuador:  Ever since she let Our Lord and Our Blessed Mother mold her, she lived what the book of Sirach says.

Sr. Nathaly Vera is from Chone, Ecuador and met Maria Augusta when she was twelve years old. She witnessed Maria Augusta’s transformation from that shy girl she was into the strong, brave, and always sweet young woman that she became.

I met Maria Augusta when she was twelve. I remember that she was shy. She would look at us girls in the Home and laugh a little, but she never spoke to us. She seemed like a very profound yet silent girl. I always thought, “One day she is going to surprise us, because you can tell that the Lord is pursuing her.”

I remember the first camp we had in Ecuador. She attended it and came back a different person. I don’t know what happened in her soul at that camp, but she was transformed. Her gaze and her way of being changed. She began to develop a trustful relationship with us and became very united to us. She was nice to be around.

I always saw her smiling, something that caught my attention. We used to call her affectionately, “Cieli,” and I would add, “Mi negra.” She always replied with her smile. I remember one time I was joking around with her about her vocation, and she looked at me as if to say, “If you only knew…”

She was a very brave girl. She had a strength that left our jaws hanging. Since she was so shy, we didn’t think that she was like that. I’ll give you an example: In 2009, the Cross for World Youth Day 2011 Madrid was being taken around Ecuador in pilgrimage. We had to go to El Carmen, a town in Manabi, to pick up the Youth Cross. We had agreed that all of the girls would go to receive it, but we didn’t know if Maria Augusta and her sister would come with us. Her sister had told us that they might not come because of personal reasons, but Maria Augusta had said that she would come.

The next day, Maria Augusta arrived at the sisters’ house. We were already prepared to leave to pick up the Cross. Surprised, we asked her, “You’re coming?” She laughed that laugh of hers and said joyfully, “Yes, I’m coming.” She said this with both happiness and strength, as if she had overcome a great difficulty. We continued to ask, “And your sister?” She answered, “I don’t know, I came by myself.” The next day, her sister told us what happened and said that she admired her little sister’s strength and bravery for what she had done.

She had a strength that moved [others]. She was admirable: always working, playing, laughing… All for Her (the Virgen Mary) who transformed Maria Augusta’s soul. Ever since she let Our Lord and Our Blessed Mother mold her, she lived what the book of Sirach says: “Set your heart right and be steadfast, and do not be hasty in time of calamity. Cleave to him and do not depart, that you may be honored at the end of your life” (Sirach 2:2). 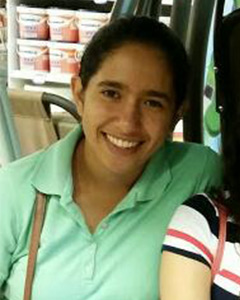