Karla Jiménez, Ecuador: "Simply reading what other people say about her motivates me to live in perfect charity, giving a constant “yes” to God."

Karla Jiménez is from Guayaquil, Ecuador, and is an aspirant of the Servant Sisters of the Home of the Mother. She only spoke with Valeria once, but her simple example of charity left a profound mark on Karla. She is thankful to all those who have written about Valeria, because their testimonies have greatly helped her in the discernment of her own vocation. 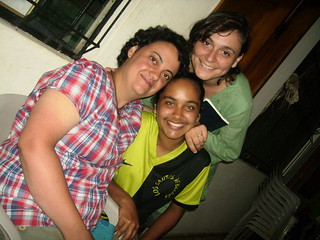 I only knew Sr. Clare, María Augusta, and Valeria, even though I had only seen Valeria a couple of times. I only spoke to her once, in Chone, during an encounter organized by the sisters. I had a piece of trash that I wanted to throw away and I didn’t know where. I saw Valeria walk by, and I asked her if she knew where the nearest trash can was. She looked me in eyes with great simplicity and with huge smile said, “I don’t know, but don’t worry, I’ll throw it away somewhere,” and took the piece of trash and went to look for a trash can…

I was amazed by her great act of charity. It was a very small gesture, but it left a great mark in me. I saw how a Christian should live charity and the small things, in the most insignificant things that nonetheless draw you very close to the Lord. Her eyes radiated that joy that only comes from giving oneself to God and to others.

Reading other people’s testimonies about her has helped me very much during my time as an aspirant. Simply reading what other people say about her motivates me to live in perfect charity, giving a constant “yes” to God.