She Totally Outdid Herself

Estrella, Ecuador: During the summer camp that we had in 2011, she was one of the team leaders while I was the assistant leader.

Estrella Cornejo met Maria Augusta when both of them were youth members of the Home of the Mother in their birthplace: Chone, Ecuador. Here she recounts several stories that acquaint us with Maria Augusta’s truly admirable spirit of sacrifice and zeal for souls. Shy by nature, Maria Augusta did not let her shyness impede her from being the apostle that the Lord expected her to be. 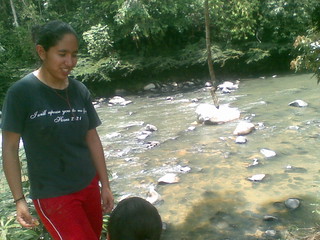 Once we took part in a mission trip that was organized to evangelize around the center of Chone, our city. We had to go two by two. Maria Augusta was embarrassed to talk to people, and since she was shy, it was really hard for her. I told her not to worry and that if she did not want to talk, she did not have to. She answered that since both of us had to go, both of us had to talk. We had to visit many houses and you could tell that it was hard for her. In the end, she made a huge effort.

During the summer camp that we had in San Andres (Chone, Ecuador) in 2011, she was one of the team leaders while I was the assistant leader. I remember that we had four girls who were a group of friends. They were what in Ecuador we call “super girls,” since they complained about everything. One day for lunch there was food that they did not like and they did not want to eat it. They tasted it, but there was no way to get them to finish it. I could not believe it, because I knew that that dish was just what was really hard for Maria Augusta to eat, and it was a lot... When I saw that she had three times as much food, I wanted to help her. It was impossible. She would not let me. I guess she was offering it all up.

In the same camp, Maria Augusta and I had spoken with the Sister in charge to see if separating the girls who were causing problems in several teams would be of help. The Sister did not see that it was a wise decision and told us that we ought to be patient, because patience obtains all things. Maria Augusta always told me, “Estrella, do you think we’ll be able to help those girls?” I could only repeat what the Sister had told us, that patience has a lot to do with suffering, and that we should suffer a little, because later, if God willed, we would see the fruits.

At that summer camp there was a river close by. Maria Augusta loved the river. Our girls didn’t want to get in the water because it looked very dirty to them. In the end, they didn’t get in. Maria Augusta thought that if we spent more time with them, maybe we could win them over so it would be easier for them to be obedient. So she ended up not getting in and sent me with the rest of the girls from the team so that they wouldn’t be left alone.

There were a lot of gestures like these that impressed me. She totally outdid herself.