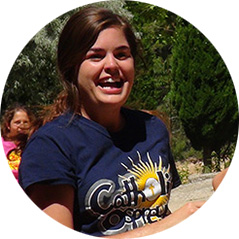 I admired her life, her joy, and the way she could just make anyone laugh.

Lauren Vaccaro is from Jacksonville, Florida and met Sr. Clare in 2007 through the Home of the Mother Summer Encounters. 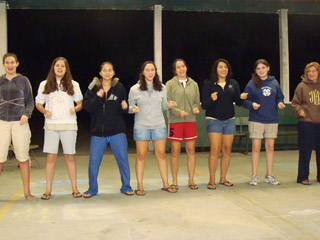 Lauren in the summer camp in Jacksonville, 2007

My name’s Lauren Vaccaro and I’m 22 years old. I´ve know the Home of the Mother for 10 years this year.

I met the Home of the Mother through a family friend who also was going to a summer camp in 2006 and that’s the first summer camp I went to. I met Sr. Clare the next year at a summer camp. I admired her life, her joy, and the way she could just make anyone laugh. She always had a group of girls around her. You were drawn towards her and I remember everyone always wanting to be close to her because she was always telling a joke. I remember having a really good time that summer because of her example and that of the other sisters. They were down to earth and funny. They made you want to come back because you realized that they had so much wisdom and love for truth and the Faith. At the same time, they could also relate to you, were authentic with you, and were not what the media portrays sisters and nuns to be.

When I was sixteen, I was climbing up the side of a waterfall during camp and I sliced open my leg. Sr. Clare had the camera [at the time]. She was able to take such a serious matter, where everyone was worried, and make it lighthearted. She calmed everyone down and made up a story about how I had been wrestling an alligator. She was able to take such a stressful situation and make it so lighthearted, taking away some of the girls’ worries…it was funny.

My memories of Sister Clare in Jacksonville are really from years of going to summer camps and seeing her hilarious way of life, just how she lived her life. It wasn’t something that she did or said, it was just her general way of being. She was able to invite people in and make everything hilarious. She was really funny, but had so much depth. I do remember her telling us her vocation story. We were all sitting outside on the floor. She told us that she was actually from Ireland, but we didn’t know that because she could put on an American accent so well. She told us about how she was from Ireland and used to be an actress, and then how she felt called to be a sister. And I just remember thinking, “Wow. It’s so great to know that there are young girls in this world that can be called to be a sister who are normal.” They are not what the media portrays nuns to be. You know, it’s not a weird thing, it’s a normal thing. It’s a beautiful vocation. 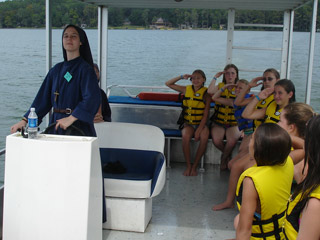 I remember her sticking with me really well because she was a normal girl who used to be an actress. She lived such a high life, but she told us that it didn’t fulfill her. The world tells you what you should be or that it’s the best vocation or job ever, but it doesn’t fulfill you. She was still empty and she knew that she was called to something higher. She left her family behind, even though they didn’t understand, and did what she knew that God wanted of her. She showed much courage and didn’t allow anything to hold her back. She was so joyful. You could tell that she definitely had the fullness of life now. She really was where she was supposed to be.

Did Sr. Clare ever help bring me closer to Our Lady and Lord through a specific talk? I would say it was more her example again. How she lived, how she chose to interact with people, her reverence in Mass, and of course, the Home in general. It so centered around Our Blessed Mother, and she carries us closer to Jesus. I would say that it was the Home in general that really helped me become close to Our Blessed Mother and the Lord.

I went to Ecuador in 2013 with fifteen other girls. Sister Clare with a couple of other sisters came and picked our American group up from the airport with two big pickup trucks…well actually they were kind of small.

The first thing I remember was her making a joke about how she was going to get 15 girls and all of our luggage into the two small pickup trucks. She made the situation funny because we Americans aren’t used to riding in the back of a pick-up. She got right to work. I remember her saying, “Ok, girls let’s just do it.” We packed all our stuff in the back of the trucks. Some of us were sitting on top of the luggage and some of us were in the back of the truck with the driver. It just worked out, and was so fun.

I believe she was in the Guayaquil community. She explained everything that they did there. There were so many young people that went to catechesis. We were able to see the church and help build a little bit.

I found out about Sister Clare’s death, while I was painting the Catholic Student Center for the University of North Florida Catholic Ospreys. My phone started ringing. I picked it up and it was a message from my friend Cristina who knows the Home. She said, “Have you heard that there was a really bad earthquake in Ecuador and there’s a sister and other people trapped?” And I said, “Oh my goodness, no.” There is a chapel connected to the Student Center and so I went into the chapel and prayed for them. I didn’t know any of the details: who it was, what was going on… I received another message when I came out saying that it was Sister Clare, but there wasn’t much more information. When I got home, I had to work on a homework assignment, but I saw an email with information on what had happened. In Facebook there was also lot of information. It wasn’t clear to me if she had died yet, or if she hadn’t, if they were able to get her out. Finally, I was deciphering through the different messages and realized that she had died with some other girls. I remember going downstairs and telling my parents. We gathered together and said a prayer. It was a hard moment but beautiful that we were able to come together as a family.

I would say Sister Clare’s death affected me in a way that made me reevaluate how I was living. I realized that we are not made for this earth, we’re made for Heaven. She has reached that before us, she’s there, God willing. It’s just a reminder to that we’re not called to live on earth, we’re called to live in Heaven. We have to keep striving to live a holy and virtuous life. She clearly did that, and so she is able to be in Heaven right now with Jesus and Mary and all the angels. One day hopefully we will be there too.

I did know that Sister Clare did the voice of the bird in the Hi Lucy programs. I was older, but sometimes Sister Grace would put them on when some of the girls of the Home of the Mother would get together. We would watch it and joke around. I nanny for a family and they watch it. It’s beautiful to see how she is still making such an impact through her words and the TV program. She still leaves a legacy behind.