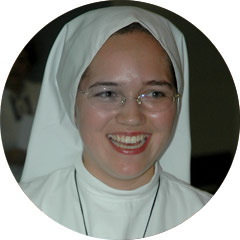 She had a great gift with children and young people.  She always led them to the Lord and the Blessed Mother. 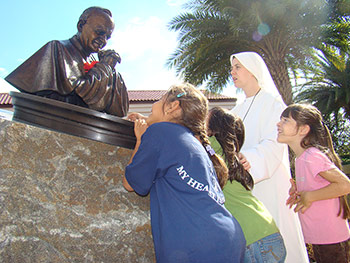 Sr. Clare praying with a group of girls in 2008

I met Sister Clare in Zurita (Cantabria, Spain) when I was fourteen years old.  It was 2004 and she was in her first year of the novitiate.  One of the first things I noticed was that she always looked for a way to win people over and make them laugh.

It was during that first meeting when she found out that my mother’s side of the family was from Belgium. She asked her to teach her something in Flemish, but the only word my mother could remember was “voncha”, which means “child”.  With this one word, Sister Clare would say the following to my mother every day, “Lucy Maes has a bunch of vonchas”, which means, “Lucy Maes has many children”.  It was a play on words.  It seems like an unimportant detail, but it made a big difference for us when we met the sisters for the first time.

A few years later in 2009, when I was a candidate with the Servant Sisters, I went to live with the Sisters for five months in Jacksonville, Florida (United States).  Sister Clare was in the community in Jacksonville at the time.  The Sisters live next to the parish and the parish school.  They help teach religion class to the children and they also teach catechism in the parish, as well as many other things.  Many times I went to help them teach the younger children and I also helped with the First Communion class.  Sister Clare had a great gift with children and young people.  She always led them to the Lord and the Blessed Mother.

At the time she was preparing a group of more than thirty 8-year-olds to receive their First Communion.  She told them over and over again that on that day, the most important thing was the fact that they were going to receive Jesus in the Eucharist for the first time.  She insisted that they shouldn’t pay attention to anything other than Him: they couldn’t be distracted by the pictures or the dress... they could only think about the ceremony.  Then she would say again, “When you’ve received Jesus, look down so that you aren’t distracted by the cameras or your parents or anything else... You have to be focused on what you are doing, about who you are receiving.”

It was impressive to see the beauty of that ceremony.  You could clearly tell that the children were very well prepared and that they knew what they were doing.  Afterwards, they were so happy that they had lived it in such a way.