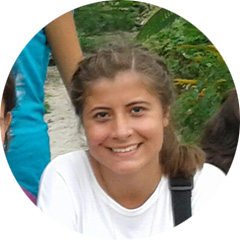 "During the last few months, I have had the grace of sharing many moments with Sister Clare and the girls."

Cristina Pinargote belongs to the Home of the Mother group in Playa Prieta.

I am Cristina Pinargote.  I have been a member of the Home of the Mother in Playa Prieta for the past three years.  During the last few months, I have had the grace of sharing many moments with Sister Clare and the girls.  We used to do a lot of things together, one of the things we used to do was go to Mass everyday with the Sisters.  In Playa Prieta we don’t have daily Mass, so we would go with the Sisters in their pickup truck.  I remember that in the car there was always a joyful atmosphere.  Along the way we would sing songs to Our Lady.  I remember that Jazmina would always sing the song “Y tú otra vez” (“And you again”), which she liked very much.  We would also talk about what we had done that day or we would remember pilgrimages that we had been on, graces we had received, important moments…One time we stopped at the hospital after Mass, but only two Sisters got out of the car.  There were eleven of us in all, including the Sisters.  While we waited for the Sisters, we started singing songs to the Lord and Our Lady.  The people that walked by stared at us. We started to sing louder and louder.  I remember that night with great joy, because we laughed more than ever.  One thing that I can say is that when we were with those girls we lived true joy.

I also remember the week of the floods.  I wasn’t able to help them clean the school because I was sick. One morning, on the way back from Mass, I told them that I was going to bring them a snack, because they were working really hard and they were going to need energy to be able to keep going, and since I wasn’t helping them clean, the best thing that I could do was to bring them food.  I got home and started to get everything ready.  When I got to the school they told me that they thought I wasn’t going to go back, but they were excited to see me.  I was so surprised to see how grateful they were.  They were really happy and their eyes twinkled.  This was the Thursday before the earthquake.  It was a joy and a grace for me to know that I was able to do a work of mercy with them: “Feed the hunger” and that way, I could share with my friends who are now in Heaven.

They ended up inviting me over for lunch.  I give thanks to God for giving me that precious moment.  Saturday, April 16th 2016, we had Mass before the earthquake hit.  Catalina told me that that day they had been waiting for me and the snack [I was going to make].  I told her that I hadn’t been able to make it, but that the following week I was definitely going to bring them a snack.  However, I never had the chance to bring it to them because the “snack” was already given to them by “Someone” who had filled them and now they will never hunger or thirst again.
May God bless you and Our Mother protect you.