Changing is HARD! And Fighting is TIRING!

Karolina Vera:  A letter Sr. Clare gave me on Saturday, April 9, 2016, just one week before the earthquake.

Karolina Vera sends the last letter Sr. Clare wrote her just one week before she died in the earthquake on April 16, 2016. Sr. Clare responded to some sort of interior call in order to tell Karolina certain things. One week later, that brief letter became Sr. Clare’s will to Karolina. Karolina begins explaining the context in which she received the letter from Sr. Clare.

We have transcribed the letter below, but we encourage you to view the original letter containing drawings that are impossible to translate, yet reinforce the text’s content.

The photo is a letter Sr. Clare gave me on Saturday, April 9, 2016, just one week before the earthquake. I remember that we were talking for a little while outside the school’s chapel. I noticed that she seemed a bit strange. It was if she had to tell me something but didn’t dare to. To be honest, I knew Sr. Clare pretty well, but I didn’t think much of it.

At a certain point, I became a little bit angry because of something she told me and I left. I went into the chapel and sat in the third pew. Two minutes later, Sr. Clare came in. She knelt in the pew behind me and said in my ear, “Because you got angry at me and left, I wasn’t able to give this to you.” She showed me the letter and continued, “This is embarrassing for me, but the Lord asked me to do it and I will obey, even though I don’t understand.” She gave me the letter and left the chapel.

I have to admit that the whole thing seemed funny at first, because Sr. Clare and I saw each other on a daily basis. She could have told me what she wrote in the letter face to face without having to write it. That was my first impression; later I understood that it was what God was asking her to do and she obeyed that request. It became a tug to my conscience regarding how I was obeying God and the people around me. Then it wasn’t funny anymore.

I will always thank God for giving me the opportunity to live with Sr. Clare and the girls and for everything I learned and heard from her.

This is the text of the letter: 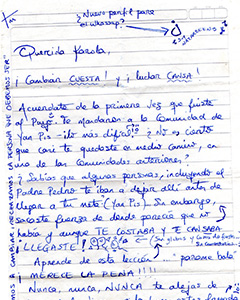 Changing is HARD! And Fighting is TIRING!

Remember the first time you went to El Puyo. You were sent to the community of Yan-Pis—the most difficult one! Isn’t it true that you almost stopped halfway at one of the previous communities?

Did you know that some people, including Fr. Pedro, were going to leave you there before reaching your goal (Yan-Pis)? Nonetheless, you drew strength from where it seemed that there was none, and even though it was HARD for you and YOU GOT TIRED, YOU MADE IT!!

Learn this lesson… Listen to me. IT’S WORTH IT!!!!

Never, never, EVER separate yourself from God and the Virgin Mary. If you do, you’re a wreck. Seriously. You are a good person and you can give and change a lot. I know it. Keep going, don’t be afraid!

“If we refuse to change, we reject the person we should be.”