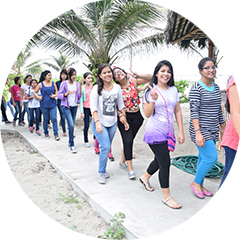 My re-encounter with God, thanks to Sr. Clare and Sr. Sara

Andrea Moreta is from Ecuador and met Sr. Clare during her time there. 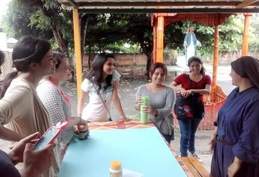 I was going through a very dark moment. I had been far from God for months, because I felt like I had betrayed Him in such a way that I didn’t deserve anything from Him. Just the thought of naming Him, looking for Him, or going to Church would make me upset and nervous. At that time, a friend wrote me to see if I wanted to attend a talk that was going to be held at her apartment. I was curious, so I asked what the talk was about, who would be speaking, and who was going to be there.  She answered me that the talk was about human formation: the use of contraceptives, marriage, etc… Her roommates would be there, and a few religious Sisters would be giving the talk.  Everything had been organized by Aura, a girl that had known the Home of the Mother for a long time.  The moment that she said a few Sisters would be giving the talk, inside of me I said a flat out “NO,” but I couldn’t think of how to tell my friend that I didn’t want to go. I responded with various excuses: “I’m just not good friends with those girls, I'm just acquainted with them. I might have classes at that time, etc.” She answered me, “Don't say that. I'll be there. You'll see how it's going to be good for you.” So I said to her, “Gaby, you know that I won't be comfortable. You know all that I've done. I'll feel really uneasy if they start to talk about religious things and I don't want that.”  “I understand,” she said.  She didn't insist anymore, and just ended the conversation saying, “Ok, well just let me know if you decide to come, so I can open the door for you.”

The day of the talk arrived, and I don't know why, but I wrote my friend as soon as I was finished with class, and told her I was walking towards her apartment.  That's how I got to know Sr. Clare and Sr. Sara. I don't even remember what we talked about, but I do know that it was better than what I had expected. I felt very at ease, so much so that I participated in the discussion and left wanting to talk more. But the Sisters had to go to do other things. That same evening, my friend wrote me and asked me if I liked the talk and what I thought about the Sisters. I admitted that I had really liked the talk, and that the Sisters were great. Specifically about Sr. Clare I thought, “She's incredible! She's super joyful, fun, friendly, and pretty young to be a Sister.” And about Sr. Sara I thought, “She’s really serious, firm, well-mannered and calm, but knows how to be joyful at the right moment.”  So, together they were the perfect mix that day to attract us and make us want to continue going to the talks.

So that's how once a week we started to get together to talk about different topics, and little by little they spoke to us about God, about His infinite love, mercy, understanding, and His commandments, without imposing it on us or obliging us to follow it, without trying to make Sisters out of us, as they said laughingly. They didn't only talk to us about God, but they also shared their stories with us and asked us about our lives. Each week we liked the talks more and more. We were now their friends and we became so close as a group that we would say to them, “Sisters, next week can you talk to us about this?” Or they would say to us, “What do you think if we talk about this next week?” And we'd answer, “Of course, that'll be great.” 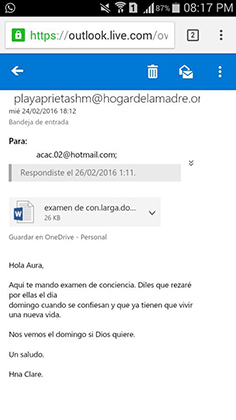 E-mail that Sr. Clare write to Aura:
Hey Aura, Here’s the examination of conscience. Tell the girls that I’ll be praying for them on Sunday when they go to Confession and that from then on, they have to live a new life. We’ll see you on Sunday, God willing.
God bless, Sr. Clare

During one of those many talks, they explained to us the importance of this year: the Year of Mercy. They spoke to us about indulgences, venial and mortal sin, about the vital need to go to Confession, to do things well, and to start to live a new life. So Aura came up with the idea that we could spend a day together in order to go to Confession, gain the indulgence (for the Year of Mercy), go to Mass, and later spend the rest of the afternoon together in Playa Prieta. We all decided that it was a good idea and agreed to go. Sr. Clare said, “Great, so I’ll send the examination of conscience to Aura.” Then she laughed and said, “It’s really long, like seven or eight pages.” We said, “Really? It’s that long?” “Yes,” she said, “but it’s because they’re like questions. What you have to do is look it over alone, in intimacy with God, and answer very honestly.”

The day of the retreat arrived. When we got there, we had the surprise that Sr. Clare wasn’t there, so Aura lead us in the retreat. This made me even more nervous. Even though I was all nervous, I went to Confession…. I was almost the last one, but I did it. It was a big step for me. We gained the indulgence, attended Mass, and caught the bus that took us to Playa Prieta. Once we reached the Sisters’ house, Sr. Clare cheerfully came out to greet us.

It was a very beautiful day. We prayed, we ate, we played, we talked, and we made plans to come back to Playa Prieta and for them to give us more talks and to share time together.  The memory of that day is very special to me. I had never seen girls so young that wanted to follow the way of the Lord. Their smiles and interior peace brightened everything and was very contagious.  Nor had I ever seen Sisters like them, behaving like young girls, especially when they played soccer with the girls of the village. It was very sad when the time came to leave, because we would have liked to continue spending time with all of them, and getting to know the stories of the girls. I think that if I had known it was the last time I was going to see Sr. Clare and the postulants- Jazmina, Mayra, Maria Augusta, Valeria, and Catalina- I would not have doubted in staying more time, since unlike my friends, I wasn’t going to be able to attend other retreats like Holy Week in order to see them. But as they say, there are moments and people that you never forget, and I will always remember them and keep them in my heart.  They changed me and helped me find God again and understand that God loves me in a way that only He can do. Thanks to Sr. Clare and Sr. Sara, I now pray every night, I give thanks to God when I wake up, I go to Mass every Sunday, and I try to defend my faith.  It hasn’t been easy, but their talks strengthened our spirit and our desire to become better people. I don’t think that any of us would think about going back to how we lived before, not just for love of God, but also to honor these Sisters, so that nothing that they taught us would be in vain.