Clare Hernández (EEUU): That wall was shattered to pieces by the time I left that beautiful country. It was as if Sr. Clare was everywhere.

“Life was back to normal, but no one had forgotten Sr. Clare.” This was Clare Hernandez’s experience when she went back to Ecuador in 2017 for a second missionary trip there. Clare Hernandez was just a little girl when she met Sr. Clare in 2008. In April 2016, she had already bought her ticket for the missionary experience in Ecuador that summer. Sr. Clare’s death marked that trip in a definitive way.

My earliest memories of Sr. Clare were from my first summer camp in 2008. She was my group leader, and needless to say, all of us little seven and eight-year-olds were completely in love with her. She knew exactly how to reach us, how to catch our attention and transform our innocent love for Jesus and Mary into something even stronger.

I think it was her charisma and her voice that captured me the most. Sr. Clare had that voice that could make everyone pay attention, both when she was singing and talking. She sang so beautifully and with all her energy. I remember her during chapel time, how she would play the guitar and sing, sometimes with her eyes closed, and so obviously absorbed in prayer while she gave glory to God with her voice.

Sr. Clare was hilarious, too. I’ll never forget her “radio shows” where she would sit on top of the dining room table with another sister and without a trace of embarrassment be able to make all of us burst out laughing with her Irish accent and crazy faces. She made me believe that she could speak Chinese, that only the color green existed in Ireland, and she told that famous leprechaun story over and over when we asked because every time it was just as ridiculously funny. She took those opportunities to teach us important lessons, too. I still remember some stories she told during our group meetings that had a big impact on me when I was little. Virtues such as generosity, obedience, charity, overcoming… she talked about those a lot to us.

My next year of summer camp I was a whole year older, and therefore far more worldly wise. Sr. Clare was still just as awesome deep down, but my friends and I thought ourselves way too cool to show it. So we passed notes in church, secretly threw away the food we didn’t like, and just had to “use the bathroom” during chore time. I remember one incident where another sister was calling me and two of my friends to come and help make lunch. We were busy finishing our craft, and had no intention of stopping till we were done. The third time the sister called us, Sr. Clare, who had been at another table but apparently also watching what was going on, came right up to us. I’ll never forget the how disappointed and upset she looked. I’d never seen her anything but totally cheerful, and I was really taken aback. “You girls are going to have to decide right now how you’re going to live the rest of this summer camp,” I remember her saying. “Are you going to go around pretending and only hanging out with each other, or are you going to pay attention, listen, obey, make new friends, and learn something? I’m very disappointed in all of you.” A lecture from anyone else I probably would have just shrugged off, but coming from Sr. Clare for some reason this really hit me hard. Most of middle school and high school Sr. Clare lived in different communities outside the United States, and so I didn’t see her again during that time. In 2016, the summer before my senior year of high school I booked a flight for Ecuador to spend a few weeks in the missions run by the Home. Sr. Clare lived in Playa Prieta then, teaching at the school. I was excited but actually also a little nervous to see her again. That’s how much her getting me in trouble had an effect on me! Then, April 16 happened. I remember waking up that Sunday morning, and my family was in the living room around the computer and by the look on their faces I knew something bad had happened. When we received the news later that day that Sr. Clare’s body had been found, it was almost unreal. It had been years since I’d seen her, but just the memory of her young, always happy face was still so vivid. I couldn’t quite grasp the fact that she was gone. 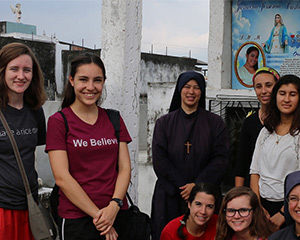 That trip was wild for me. Heading into my last year of high school it was a time that I was really deciding for myself what kind of person I was going to be, and how seriously I was going to take my Faith. I always was and knew I always would be religious to some extent, but I also had this constant thin wall in front of me which blocked everything from becoming too serious. That wall was shattered to pieces by the time I left that beautiful country. It was as if Sr. Clare was everywhere.

Whenever I introduced myself as Clare, I always received a huge smile and a “como Hermana Clare (just like Sr. Clare)!” Then there were stories. So many stories which filled in the gaps of the years she didn’t live in the States. The girls my age would tell me all the times Sr. Clare helped them in their lives, be it boyfriend issues, parent troubles, or finding their vocation. The little kids talked about her smile, her voice of course, and how she had been their favorite teacher in the school. Even when some of the Spanish words were lost on me, I could always understand what they were saying through the expression and enthusiasm with which they talked about their Hermanita (little sister).

When we visited Playa, it was a sobering experience. Everything was gone: the school, the convent, and all these things that the families in that small village had been so proud of. We knelt on the ground where the convent was, where Sr. Clare had been found. Nothing left but pieces of wood not yet cleared and a nail here and there, but otherwise just dirt and rubble. But it wasn’t as if everyone was still in tears. The town had long since begun to rebuild, restart. Construction was already underway for the new school.

It was amazing to me to witness this fantastic collaboration. Every person who had known her and the other sisters were more than willing to take much of their time and energy to help restore the school and convent. I’d never seen anything like it before, and I knew I would be back. 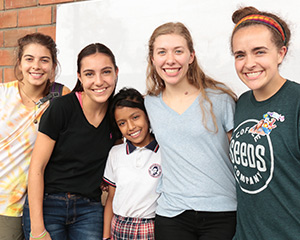 The next summer I was there again, and in that short time the former site of rubble and ugliness was transformed into something so beautiful. The school and chapel were completed and everything seemed so perfect. Life was back to normal, but no one had forgotten or ever would forget the memory of Sr. Clare. They all still talked about her as if she had just been there yesterday. The memory of the little kids impressed me so much. I met all the kids in the senior class as well and their genuine friendliness and joy was incredible. I learned a little about some of their backgrounds, how many of them come from broken families and extreme poverty. But every day they show up proudly to school in their uniform, with a smile on their face, and ready to learn. The seniors, Valeria’s class, I later learned were the ones who came to the site of the earthquake to rescue those trapped underneath. Right after it happened they thought of their school and the sisters and they came running to help. One of the smaller boys was able to crawl under the fallen building in order to rescue one of the sisters. This was how much these sisters and their school meant to them. It was almost overwhelming, this loyalty and joy that everyone showed, and it wasn’t as if any of them had it easy.

“Todo o nada.” All or nothing. I thought about that phrase of Sr. Clare’s a lot that trip. It made sense there, it was so clear. Even though Sr. Clare wasn’t there in person I learned more about her and from her than I think I ever would have had she been standing right in front of me. I met Sr. Clare again through the kids she taught, she people she touched in some way during her life. It was as if every person she met was somehow changed because of her.

I learned she sang so enthusiastically that her voice actually started to become slightly hoarse before she died. People found out later that she suffered from severe migraines often, but no one could have guessed when her laughter and smile were their strongest memory.