Half-joking, as always, but completely serious, as always, Sr. Clare wrote her letter to the Three Kings in 2016.

Erika Tuarez from Playa Prieta has given us a beautiful gift for the Epiphany. She has sent us a letter that Sr. Clare wrote to the Three Kings on January 6, 2016, just three months before her death.

Writing a letter to the Three Kings is an old Spanish tradition. At Christmas in Spain, the Three Kings are the ones who bring gifts to children, just as they did with Baby Jesus two thousand years ago. A few days before the Epiphany, children write letters to the Three Kings and tell them what gifts they would like to receive. The children know that the Kings will take into account how they have behaved during the year and will bring gifts accordingly. In this way, if the children know that they have not behaved well, writing the letter helps them to reflect and make good resolutions for the new year that has just begun.

Half-joking like always, but completely serious as always, Sr. Clare wrote her letter to the Three Kings. Erika explains the situation and why Sr. Clare wrote this letter on January 6, 2016. “For the last two years, we girls from the Home of the Mother in Playa Prieta would prepare a surprise dinner for the sisters on the Epiphany, with games, gifts and songs included. We’ve always tried to make it a surprise, but it was so difficult to hide while we dressed up for the big night. Last year, 2016, we asked the sisters to write their letter to the Three Kings. They had to leave it at Baby Jesus’ crib so that the Kings could pick it up. Providentially we have found the letter Sr. Clare wrote to the Three Kings last January 6, 2016. When you read it, it feels like you’re listening to her.” 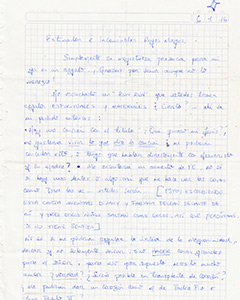 Simply your majestic presence is a gift in itself for me. Thank you for coming, even though I don’t deserve it!

I heard that you bring SPIRITUAL and MATERIAL gifts, is that right? … Well then, here goes my list:

There’s a song titled, “¿Qué quiero mi Jesús?” [What Do I Want, My Jesus?]. I would like to live what the song says. Can you grant me this, or do I have to speak directly with Jesus Christ and his Mother?

I would love an increase of FAITH. I don’t know if lenses or something similar exist that can make me see things as God sees them… You’ll see to what is best… (I’M WRITING THIS LETTER WHILE DIVANY AND FABIANA ARE FIGHTING IN FRONT OF ME AND THREE OTHER KIDS JUMP AROUND LIKE CRAZY PEOPLE, SO I’M SORRY IF THIS DOESN’T MAKE SENSE).

I don’t know if you can give me the virtue of magnanimity: to desire, and not only desire, but TO DO great things for the Lord. In order to that, I need a lot of love, of course, right?

Would a heart transplant be possible? Could you give me a heart like Padre Pio’s or John Paul II’s? 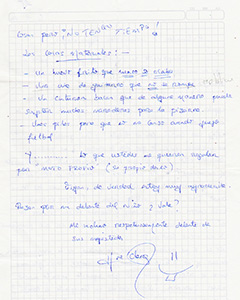 AAAAHHHH… I want to ask for a lot of things, but… I DON’T HAVE TIME!

- A fried egg that never ends.
- A guitar pick that doesn’t break (metallic).
- A cool belt that can somehow hold several white board markers.
- Batteries so that I don’t get tired when I play soccer.

And……. whatever you want to give me “MOTU PROPIO” (by your own will).

Pray for me before Baby Jesus, ok?

I bow respectfully before your Majesties,