A Friend of Sr. Clare’s in Italy

Sr. Anna Riordan tells us a story about Giovanni, a man who had a very hard life. He was in jail for ten years and recently died of cancer at 50 years of age. Guided by Sr. Clare, Giovanni underwent a huge transformation in the last weeks of his life.

Its funny how there are some people that you know for a very long time and there is no connection with them whatsoever, while others, after being with them for one hour, you feel that they are almost like family, thanks to the faith you share. In the spiritual world, the logic is different. Things work by Divine logic.

This is precisely what happened with Giovanni, a fifty-year-old man who we met a year ago in a town of Northern Italy. We call him Sr. Clare’s friend. According to his birthday he was fifty years old, but towards the end of his sickness he became like a small child.

I met him for the first time in October 2017. Two Servant Sisters of the Home of the Mother visited him at his house. We found ourselves with a strong man, rough around the edges, sitting on the sofa. He had tattoos all over his arms. He was already fighting against his sickness that some say “brought him to his death,” but I prefer to say that it was a sickness that “brought him to Life.” In our first encounter with him, he was rather distant and uninterested. Nonetheless, we thought it was a complete success because we convinced him to pray a Hail Mary with us. This man has been in prison for over ten years, accused of assisting a homicide. 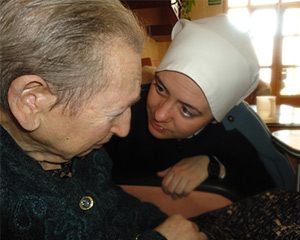 Sr. Clare at a Nursing Home

After our first visit, something began to change in Giovanni. We started to talk to him about Sr. Clare, and not long after he expressed his desire to go to Confession and begin to receive Jesus in the Eucharist.

Giovanni loved Sr. Clare very much. When he remembered what she was like before her conversion and before she was a Servant Sister he would smile and say, “She was bad like me.” One day he told us that he wanted to paint a mural dedicated to Sr. Clare in his house. She was like his hero. On the outside Giovanni was hardened, but he had a great sense of humor and was becoming more and more childlike as his earthly days came to an end. All of the Sisters that went to visit him in this time were impressed by what they saw in him.

One day when we brought him Communion we told him “Don’t worry Giovanni, we are only going to give you a small part of the host.” And he responded with a child-like voice saying, “He became small for me.” This phrase became our meditation during the time of Advent: “He became small for me.” His wife told us that he was sad because he wasn’t going to be able to build the big Nativity scene in his house this year due to his sickness. One day when we brought him the Eucharist we didn’t have anywhere to put the corporal and the purificator. His wife brought us a wooden table. Giovanni said, “I made that table.” And we told him that in the end he had been able to make the manger where the Baby Jesus was laid (the Eucharist). He was very happy with this.

On another ocassion we brought him the Eucharist and a painting of the face and hand of Jesus from the portrait of the Divine Mercy. When he saw the painting, he made a big effort to lift up his head and smile, as if he were seeing his best friend who he hadn’t seen in some time. He said in soft voice and with the excitement of a child, “Ciao!“(Hello). He lifted up his hand to touch the hand of Jesus in the painting. This time, after receiving the Eucharist, he lowered his head and rested it against the painting of the Divine Mercy that was on the table. He started talking in a low voice and we couldn’t understand him. His wife went up to him and asked him, “What’s wrong Giovanni?” and he responded, “Nothing, I am talking to the Lord!” He said it with a tone of “why are you interrupting me?” And he was right, it wasn’t a moment for other conversations.

It was truly a grace to be able to accompany him in this time. The last time we went to see him was the day before he died. He was nearly in coma. We prayed just one Hail Mary with him. We told him, “Giovanni, you are getting ready to see Jesus. Don’t be afraid of anything.” He died that night. We felt that Sr. Clare was very present.

Sr. Clare at a Nursing Home with a Group of Girls

Seeing that he was not going to healed, the day before he died his wife said, “Sr. Clare didn’t do a miracle.” We told her that Sr. Clare had done the miracle. The miracle was the victory of LIFE and the victory of GRACE in his soul. We told her, “Life triumphed in him. What greater happiness can you have than knowing that the person you loved most on this earth is prepared to encounter Jesus?” Giovanni died a completely changed person. I met him in October and I can honestly say that in his last weeks of life he was a totally different person. He had a beautiful soul. He was like the most innocent child. He used to call us “his sisters” and he really was like our brother in the Lord. His body was literally rotting away because of the cancer, but his soul was radiant.

One day, Jesus wanted to teach us that holiness is not about appearing to be good, but rather in doing the will of the Father in heaven. “What is your opinion? A man had two sons. He came to the first and said, ‘Son, go out and work in the vineyard today.’ He said in reply, ‘I will not,’ but afterwards he changed his mind and went. The man came to the other son and gave the same order. He said in reply, ‘Yes, sir,’ but did not go. Which of the two did his father’s will?” They answered, “The first.” Jesus said to them, “Amen, I say to you, tax collectors and prostitutes are entering the kingdom of God before you. When John came to you in the way of righteousness, you did not believe him; but tax collectors and prostitutes did. Yet even when you saw that, you did not later change your minds and believe him” (Matthew 21:28-32). Giovanni was one of those who said “I don’t want to go,” but afterwards repented and went. There is no doubt that souls like his are the ones that make God smile. May these souls help us unite our desire to say, “I will go, Lord,” and go out to do the Lord’s will.