When I Was Little: Mary's New Friend

Boys and girls, we should stop and think. How many hours do I spend watching the TV? 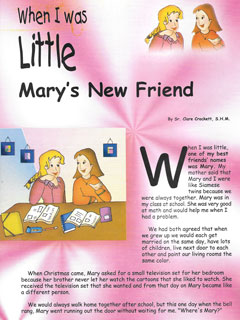 When I was little, one of my best friends’ names was Mary. My mother said that Mary and I were like Siamese twins because we were always together. Mary was in my class at school. She was very good at math and would help me when I had a problem.

We had both agreed that when we grew up we would each get married on the same day, have lots of children, live next door to each other and paint our living rooms the same color.

When Christmas came, Mary asked for a small television set for her bedroom because her brother never let her watch the cartoons that she liked to watch. She received the television set that she wanted and from that day on Mary became like a different person.

We would always walk home together after school, but this one day when the bell rang, Mary went running out the door without waiting for me. “Where’s Mary?” my little sister asked me. “She went running home, maybe she sick,” I said. The next day when I went to her house to see if she wanted to come out and play, she made a sign from her bedroom window to show me that she wasn’t coming out. Nearly a week had passed by and I hardly saw Mary. 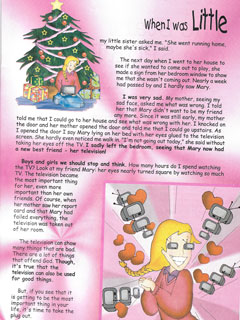 I was very sad. My mother, seeing my sad face, asked me what was wrong. I told her that Mary didn’t want to be my friend anymore. Since it was still early, my mother told me that I could go to her house and see what was wrong with her. I knocked on the door and her mother opened the door and told me that I could go upstairs. As I opened the door, I saw Mary lying on her bed with her eyes glued to the television screen. She hardly even noticed me walk in. “I’m not going out today,” she said without taking her eyes off the TV. I sadly left the bedroom, seeing that Mary now had a new best friend – her television!

Boys and girls, we should stop and think. How many hours do I spend watching the TV? Look at my friend Mary: her eyes nearly turned square by watching so much TV. The television became the most important thing for her, even more important than her own friends. Of course, when her mother saw her report card and that Mary had failed everything, the television was taken out of her room.

But, if you see that it is getting to be the most important thing in your life, it’s time to take the plug out.