Sr. Clare Sings for the Virgin of El Cajas

Sr. Beatriz Liano, SHM, Spain:  Sr. Clare's heart was full of gratitude for all that they had received at the feet of the Guardian of the Faith. She found no other way to express it than to begin singing her heart out.

October is dedicated to the Virgin Mary under her title Our Lady of the Rosary. This month we ought to honor our Heavenly Mother in a special way. To help us grow in our love for Mary, we have gathered memories from pilgrimages that Sr. Clare made to the Marian Shrine of El Cajas, Ecuador, as well as a video in which you can hear her sing "I Prefer Paradise" before the statue of the Guardian of the Faith. 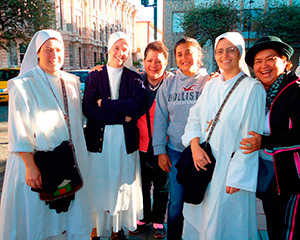 The communities of Servant Sisters of the Home of the Mother in Ecuador love to make pilgrimages with groups of young people to El Cajas, in the province of Cuenca, Ecuador. At an altitude of over 11,600 ft, there is an archdiocesan shrine dedicated to the Virgin Mary under the title Guardian of the Faith. It was built after the apparitions of the Virgin Mary to Patricia Talbot, which took place from 1988-1990. It is a place blessed by Our Mother's presence and where She pours out many graces of conversion and growth in faith. Do not expect to see great and sumptuous constructions in El Cajas. Everything is simple in the garden there. The little chapel was built with wood and straw, and the statue of the Virgin was erected on a rock.

Sr. Clare really enjoyed the pilgrimages to El Cajas. The days the pilgrimage lasted, she would give one hundred percent of herself, knowing that they were going to be key moments for the girls. Everyone remembers her during several hours of the trip with the guitar in hand and singing her heart out tirelessly. She would do this even though - in the ascent to over 11,600 ft to the sanctuary- her migraines would grow until she felt as if her head were going to explode. She herself tried to explain her experience there to Father Rafael and Mother Ana in this email from May 26, 2015. "How are you? On Sunday afternoon we went to visit Our Lady at El Cajas. We spent the night there with Her and Jesus for the Pentecost Vigil. It was really cold, but that didn't matter. Being there to make Her happy made you forget how cold you were. You know what I mean, right? Before we got back to Portoviejo, several of us who were there felt that Our Blessed Mother thanked us for our effort." 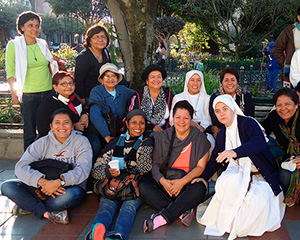 The girls also remember one occasion when, just when they were leaving the grounds, Sr. Clare retraced her steps. She went in front of the statue once again to start singing, "Thanks be to you, to you, to you. Thanks be to you, to you, to you."  Sr. Clare's heart was full of gratitude for all that they had received at the feet of the Guardian of the Faith. She found no other way to express it than to begin singing her heart out. On another trip, her love for the Virgin Mary led her to shout energetically, "Beautiful!!!!" The girls were really embarrassed because there were a lot of people at El Cajas that day, yet Sr. Clare was not led by human respect.

She sang on so many occasions at the feet of the Guardian of the Faith. In the video that is attached to this article, you can see her there, next to Sr. Kelly Maria. They are singing "I Prefer Paradise," the poem that Sr. Estela wrote and that Sr. Clare had put music to in honor of the Virgin of El Cajas. We leave you with Sr. Clare singing "I Prefer Paradise," and with the lyrics of the song so that you can pray with her and be guided by the Guardian of the Faith in your personal path to surrender to God.

In the cold night
of the dormant soul
who laments her defiance
a "yes" enlightens the darkness.

The young heart,
that trembled in the face of surrender,
became strong at the touch of your caress.

And morning came, clearer than ever before,
under the protection of a Mother, Guardian of the Faith,
on the sacred grounds
where she bows her heart.
She trembles in love and offers her life.

Now everything has changed,
haven of peace, innocent joy.
Finally they gave what their God asked for.

"I prefer Paradise," was the cry from within.
The fear to give, to surrender, and to die to live was lost.

The Mother smiles and embraces her little ones,
in the silent valley where everything speaks of Her.

"I prefer Paradise," was the cry from within.
The fear to give, to surrender, and to die to live was lost.