Naomi Cabrera, Ecuador:  She said that she belonged to the Lord, and He could ask anything of her.

Naomi Cabrera de la Rosa is currently a novice in the Servant Sisters of the Home of the Mother. A little over two years ago, she entered as a candidate with Jazmina, in the same ceremony. Here she recounts Jazmina's joy on that day and her longings to never deny the Lord anything. 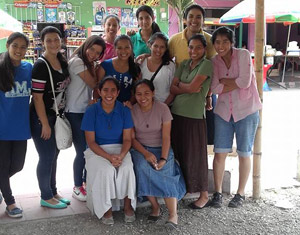 The most meaningful memory I have of Jazmina is our entrance as candidates in the Servant Sisters of the Home of the Mother. It was on April 20, 2015. Her disposition really surprised me. She was aware that the step she was taking was already a definitive yes, and it truly was.

The ceremony took place at a Marian sanctuary that is found in the Ecuadorian rainforest, the Sanctuary of Cajas, where Our Blessed Mother is venerated under the title, "The Guardian of Faith." This was very meaningful for Jazmina, because sometime before, in an activity with the Sisters, she had been asked to choose a shrine or sanctuary that she wanted to visit. She had to choose between several well-known sanctuaries, yet she felt strongly within her that she had to choose the Sanctuary of Cajas, which she ended up doing. She did not understand why until the day of our entrance.

We left Guayaquil to head toward Cajas. The trip takes about four or five hours. When we were almost there, the bus broke down and we were left on the side of the highway. We were already in the rainforest, on a mountain, and the view was spectacular. I remember Jazmina frolicking with her arms open and smiling toward the sky. She said that she only wanted to do God's will and never deny Him anything again. If the Lord asked her to quit her studies, it wouldn't matter to her. If He asked her to go to Spain that very moment, she wouldn't mind it either. She said that she belonged to the Lord, and He could ask anything of her.