Her Generosity Is What I Remember Most

Naomi Cabrera, Ecuador:  Her generosity in carrying out each activity is what I remember most about Jazmina.

Naomi Cabrera is from Guayaquil, Ecuador, and is a candidate of the Servant Sisters of the Home of the Mother. She tells how she met Jazmina when they went on a mission trip to Puyo in the Ecuadorian Amazon. During that trip, Jazmina's generosity and the love she had for our Lord stood out to Naomi, in spite of the fact that Jazmina was still struggling at that time to accept her vocation. 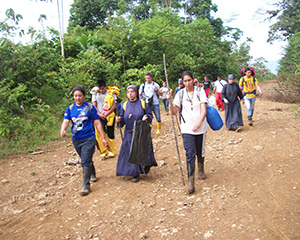 The first time I got to know Jazmina was on a mission trip that we went on to the Puyo, in the Ecuadorian Amazon. We were in the same group together with eight other people. We had to walk several hours in the jungle until we arrived at the two indigenous Shuar Indian communities, where we were going to spend a few days to evangelize.

Her generosity in carrying out each activity is what I remember most about Jazmina. For example, when it was time to be with the kids, she always thought of a song or game to make the environment more joyful, without paying any attention to whether she was tired or not. The first day of the trip was the most exhausting because of how long we had to walk, but Jazmina always had a smile on her face. On that mission trip, she gave everything she had.

I remember noticing that she never made any excuses when she was asked to do something. One day, one of the Servant Sisters asked us to go to a woman's house in the village to ask if she would let us use her house to cook our dinner there. Obviously, because we were in the middle of the jungle, the house did not have a kitchen, which meant that we had to light a small fire inside the house in order to cook. This was very aggravating because a ton of smoke came up out of the fire. When Jazmina saw that it bothered us, she offered to do it and did so in a very determined manner.

On another occasion, the Indians offered us "chicha." Chicha is a disagreeable beverage because of its preparation process. [Note: Chicha is made by chewing yucca and then let to stand in order to ferment.] The Shuar Indians consider it the best beverage to offer to their visitors. I could not bring myself to drink it because I was very disgusted by it, but Jazmina drank her serving, mine, and if I'm not mistaken, part of a Sister's. She simply said that the Chicha was the best thing they had to offer us, and that reason was enough to make her drink all of it out of love.

On that mission trip Jazmina struggled a lot because she hadn’t accepted her vocation. Nonetheless, I could perceive the love she had for Our Lord by her actions, because I saw that they were done out of love for Him alone. For example, to stop wearing earrings, because she realized that it was vain of her to do so, to not fix herself up so much, to die to herself in order to help others...