Something Had Taken Place Between Jesus and Jazmina

Sr. Kelly Maria Pezo, USA:  The graces she received that Holy Week were fundamental. They were the last push towards the fulfillment of God’s will in her.

Sr. Kelly Maria Pezo, Servant Sister of the Home of the Mother, has been destined to Ecuador for the past few years. Before the earthquake on April 16, 2016, she had been in Chone and Guayaquil. After the earthquake, she was sent to Playa Prieta. Jazmina had a lot of trust in her, and Sr. Kelly Maria was able to help her seek and find God’s will.

Jazmina went to the Holy Week Encounter in 2015 that we had in Playa Prieta. That year, the theme of the encounter was St. Teresa of Avila, who was Jazmina’s protector saint. She did not know much about her, but what she did know was that St. Teresa had been a mediocre nun for more than twenty years in the convent. This gave Jazmina hope that one day, the Lord would change her heart. She liked when we explained how St. Teresa had her conversion in front an image of the “Ecce homo,” and she told the Lord that she would not go anywhere until He strengthened her once and for all.

It’s true that Jazmina had a special sensibility for the Passion. Images of Christ wounded and crucified moved her. There were times, in which she was not doing so well, that she would not dare to look at a holy image for fear of converting “once and for all” like St. Teresa.

After speaking about St. Teresa of Avila during that Encounter, Jazmina became interested in the saint and how she clearly explained the spiritual life in her works. Sr. Clare gave the third talk on the Mansions. Jazmina exclaimed, “It all makes sense now! Now I understand a lot!” It was a discovery for her and a source of light for her soul during those days. 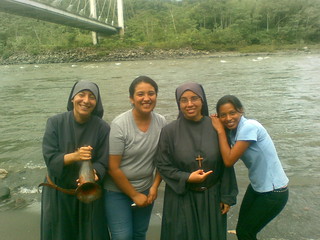 Sr. Kelly and Jazmina with Sr. Paqui and Mayra

We spoke on Holy Saturday. She told me everything that was happening inside of her. She said, “It’s just that, sister… I don’t know if I’ll respond one day!” She told me about how her soul felt weighted down and filled with an enormous sadness because Jesus did not say anything to her anymore. I advised her to look at Jesus often. St. Teresa of Avila said that all of our evils come from having taken our gaze off of Jesus. I told her that the Lord wished to “give her back the joy of her salvation” that night during the Easter Vigil, but to be able to do so, she had to look at Him. I insisted that she had to rid herself of her fear of looking at Him and let herself be looked at by Him.

It seems to me that she did. After the Easter Vigil, we left the chapel, went out to the school’s patio, and saw Jazmina, who was literally jumping for joy. She jumped up and down, and said, “Jesus has risen! He’s alive!” Later, she told me that it had been the best Holy Week Encounter ever. She said that Jesus had filled her with the joy of the Resurrection. “I’m so happy, sister!” she exclaimed. When I asked her if she had looked at Jesus, she looked at me and smiled mysteriously.

I did not ask more. I knew that something had happened between Jesus and Jazmina. The graces she received that Holy Week were fundamental. They were the last push towards the fulfillment of God’s will in her. She entered the Servant Sisters fifteen days later. Blessed be God!