She Defended the Eucharist with All of her Might 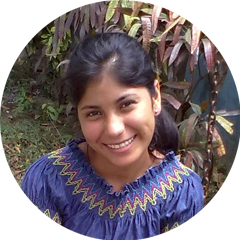 She would always say this phrase: “God chose me and I give Him thanks for it because I am nothing. Without Him I’m just nothing. He knows why He permits these things.”

Gemita Dayana Vergara Espinoza belongs to the Home of the Mother of the Youth in Ecuador. She knew Mayra, Jazmina and Maria very closely.

Gemita and Jazmina on the day she entered as a candidate.

I met Jazmina – as well as Mayra – in middle school when I was about twelve years old. She was a good student as well as a good friend. We got to know each other better when we both began to prepare ourselves to give catechism classes to children.

When she started going to the Home of the Mother meetings, her life began to change a lot. She used to like to dress fashionably, like any other girl who doesn’t know God. The years went by and we received our Confirmation together on December 27, 2009, at San Cayetano Parish in Chone (Ecuador). At that time, while she got to know the Lord and Our Lady a little bit better, you could tell that the idea of Them asking for her to sacrifice little things scared her.  However, little by little she gave what They asked of her with generosity.  I remember that she was really attached to her cell phone, and for a week, she offered it to Our Lady and left it at the Sisters’ house as a sacrifice.  During the retreats and Holy Week Encounters she always helped to make the environment joyful and full of life.

I remember that last year, before entering as a candidate of the Servant Sisters of the Home of the Mother, she told me that she was really afraid - that it was really hard for her to leave the life she lived behind.  But at the same time she was extremely happy that the Lord had chosen her, because she knew she did not deserve it at all.

She was one of the camp leaders and I was a camp counselor. I can say with certainty that she gave of herself completely and accepted that God wanted her to be His spouse. It was an amazing experience, because she never showed that she was tired, she was always the first one in everything.  She was very generous with everyone and joyful, willing to help and be a friend.

Whenever she had to say something to someone about God, about our faith, or about any other subject, she would say it with a confidence that only God can give.  She defended the Eucharist with all of her might and she had an unlimited love for Our Lady. She radiated a peace and a happiness that is hard to explain and that made you want to love the Lord and our Mother just as much as she loved Them.  She would always help whenever she was needed.

I had the chance to go to her house in Chone twice and spend the day with her. The first time it was really great. Her mother took me in as if I was her own daughter. Jazmina was already a candidate and knew about her mother’s illness. When we got to her house, she would not let her mother strain herself or physically exert herself. They had an amazing mother-daughter relationship. Jazmina would always tell me that if it had not been for her mother, she would have never responded to God’s call.   She once explained it to me: “My mom was the one who said to me, ‘Hey Jazmina, how long are you going to not respond to what God is asking of you? It’s about time for you to say your yes. And that yes has to be forever, not just for a few days, but for your whole life. Don’t be foolish. Don’t wait until you’re an old lady to say yes. You know that I will support you. If you are happy, I will also be happy.’” Thanks to these words, she made the decision to say yes with firmness.

She only spoke good and pure words…For example, “I want to be holy,” “I’m happy because I responded to the Lord,” or “I love my mother...”

In spite of the sad news of her mother’s sickness, I never saw her sad. On the contrary, she was even more joyful and would always say this phrase: “God chose me and I give Him thanks for it because I am nothing. Without Him I’m just nothing. He knows why He permits these things.”

Her favorite song, although she liked many others as well, was “Contigo mi Rosa fiel” (“With you, my faithful Rose”) by Jesse Demara.

I remember a funny story that happened on her first day as a candidate.  We were in Guayaquil at the Home of the Mother Residence, where the candidates and other girls live. Jazmina, another girl from Chone, and I were there.  She saw herself in a mirror with her skirt (which is what the candidates wear) and said, “Yay! Whoopie!! This is so exciting! Now I look good. Skirts look good on me.” And she expressed it with such a joy that no one could take away her smile.

After all that I’ve written here, I have to say that I got to love Jazmina as if she was my own sister. I will always remember her for always bringing me joy and for being a brave young woman and willing to do what God was asking of her.