With the "Shuar" Indians 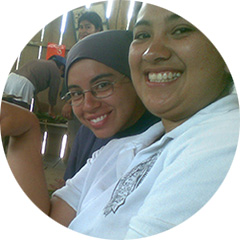 Whenever we remembered the children from El Puyo, she would always ask us when we were going back.

Sr. Kelly Pezo, S.H.M., lived for three years Ecuador and knew Jazmina during her time there. 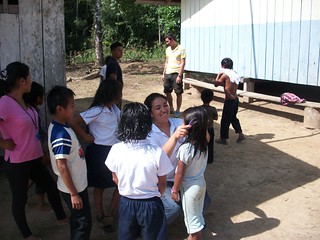 The mission trips that we did to El Puyo helped Jazmina out a lot.  About two or three times a year we would go deep into the Amazon jungle to evangelize the “Shuar” indigenous tribes.  Jazmina was the type of girl that didn’t like to get dirty, she wouldn’t share a cup with someone else, she didn’t even like to wash dishes because it grossed her out.  We allowed her to go to El Puyo on the condition that she wouldn’t complain… and she accomplished it. Not once did we hear a complaint from her, on the contrary. For Jazmina, El Puyo was something amazing.  I wouldn’t be able to tell you exactly what happened to her there or at what moment, but she loved it.  Afterwards, her face would light up just on hearing the word “Puyo”.  Whenever we remembered the children from El Puyo, she would always ask us when we were going back. She gave of herself with amazing generosity and joy, and since God does not let himself be outdone in generosity, she always received so much from Him every time she went. 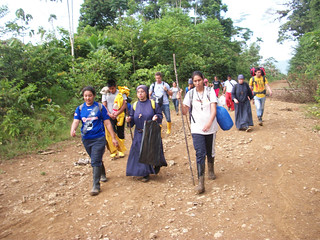 During Advent in 2014, in the chapel in our house in Chone, we had a small sign in front of the altar where we would put a short phrase and a resolution for each day.  One day the phrase was something like this: “offer yourself for those who need you”. She told me that she couldn’t read this phrase without thinking of the people in El Puyo.  She was struggling, because at that time, she was fighting against her vocation, and she knew that what the people in El Puyo needed of her was her surrender and abandonment to God’s Will. 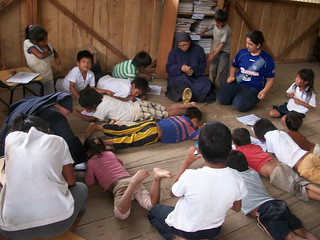 One time, during one of those mission trips to El Puyo, I went to the same community as her, named “Shakkai”. When we got there, the Indians offered us “chicha”, which is a drink typical of the Shuar Indians.  “Chicha” is made by the women of the village: they chew on boiled yucca, spit it out, and then let it ferment.  It is part of what you might call the “welcoming protocol” – they offer the visitor this drink, and if the visitor wants to be a friend of that village, they have to drink it.  A woman from the village offered me a cup. I tasted it, but I wasn’t going to be able to drink the entire cup, so I decided to give it to the little “Shuar” girl that I had on my lap (they have no problem with it, they love “chicha”).  I started to feel guilty about what I had done and asked for more.  I was holding the cup, but Jazmina noticed that I wasn’t drinking it, so she took it right out of my hand and drank it all.  I looked at her with grateful eyes, but she acted as if nothing had happened.  If she could ever do anything to alleviate a Sister, she wouldn’t hesitate in doing so.