We Can Offer Anything to Our Lord 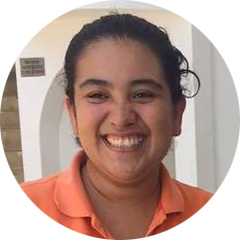 Estrella, Ecuador:  "She always spoke very firmly and I would often say that she was a rebel, but her answer was always: I’m not a rebel, I just speak clearly”.

Estrella met Jazmina in 2009 in Ecuador.

I met Jazmina in 2009, but I really got to know her better in 2010. That year a group of girls were doing a lot of fundraising to pay for our trip to the World Youth Day 2011 in Madrid. I remember that Jazmina was one of the girls who tirelessly helped us. She helped both to prepare and to sell things, although she herself would not be able to go to Madrid.

One of our fundraisers consisted in setting up a food stand in front of San Cayetano Parish in Chone, Ecuador. One afternoon, some of the girls that usually helped at the food stand were unable to come. I found myself alone and a little overwhelmed serving people. I hadn’t said anything, but Jazmina came up and offered to help me. It was Saturday and many people came to the food stand. When the sun began to set– in Ecuador it gets dark after 6:30 pm – she was startled because she was supposed to be home before dusk. To get to her house, she had to cross a bridge that could be a little dangerous at night. I didn’t even realize that she was worried because she didn’t outwardly show it. I only saw that she wanted to help me. The next day she didn’t come and I asked someone where she was. They told me that she was in trouble and couldn’t leave her house because she had gotten home late the night before without letting anyone know where she was. The next time she came to our house, I asked her why she hadn’t said anything to me. She answered, “I wasn’t going to leave you alone. Besides, how many times have we heard that we can offer anything to Our Lord? Couldn’t I offer up that punishment?” She always spoke very firmly and I would often say that she was a rebel, but her answer was always: “I’m not a rebel, I just speak clearly.”