Sr. Sara Maria Jimenez, SHM:  I went to the hospital to visit and bring him the picture of Sr. Clare. I put it next to his head. The doctors informed us of his situation, and there were little hopes. If he was going to survive, he would be in a deplorable state of suffering.

Kevin was one of Sr. Clare’s students at the school in Playa Prieta. At the end of August 2017 he went into coma because of a traffic accident. The doctors did not give any hopes of a cure, yet his mother entrusted him to Sr. Clare. He himself also prayed when he could. Surprisingly, he has recovered. Sr. Sara Maria Jimenez tells us the story. 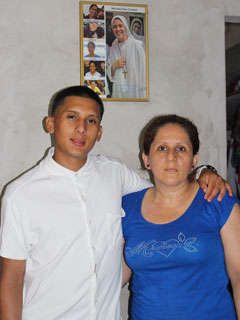 I’ll tell you briefly what happened with our old student, Kevin, and Sr. Clare. Kevin is a boy from Playa Prieta who studied at our school two years ago. He finished his studies with average grades, but for some problem could not be admitted to university studies.

Since then, he has been working with his dad in the country in a shop they own. Pitifully, he became involved with drugs and got tattoos... but he’s our student, who loves and respects us.

About a month ago, in August 2017, he and his dad got into a car accident. Kevin was the one most affected. He suffered a severe blow on his head. He was attended quickly, nonetheless, his cerebral edema was severe. He went into coma for about a week, and we were informed of his situation. His mom asked us for prayers and at all costs wanted to have a picture of Sr. Clare brought to Kevin to put under his pillow. Sr. Paqui and I went to the hospital to visit and bring him the picture of Sr. Clare. I put it next to his head. The doctors informed us of his situation, and there were little hopes. If he was going to survive, he would be in a deplorable state of suffering. With complete certainty, he was going to have motor paralysis.

Meanwhile, every night Kevin’s mom prayed with her family and neighbors to all the saints, but above all to Sr. Clare, so that he would be ok. She asked Sr. Clare interiorly for her son’s cure. 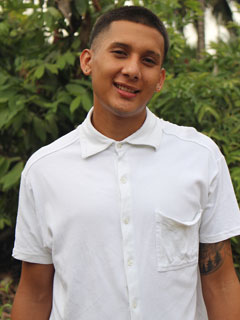 A week later he came out of the coma and began to react. When he woke up, he tells that he saw a scapular hanging from the bed. He wanted to get up to put it on. He called the nurse so that she would put it on him. When we visited him the second time, as soon as he saw us he took hold of the scapular and kissed it. He told us he wanted to go to Confession and said that he had seen Sr. Clare and asked her for help: “Sr. Clare, please, help me get out of this.”

Sr. Clare was his English teacher during his last year of grade school. He trusted her a lot. He told her about the girl he liked, and they joked together. He was very fond of her and laughed a lot with her.

Two days after he started reacting he was discharged and has slowly recovered his mobility. He went to Confession. He goes to Mass on Wednesday and Sunday and receives Communion. He walks slowly, but he does so on his own feet.