The Church Needs Her

Sr. Clare has had a profound influence on my life in these past few weeks, in a way that no other "saint" has. I have adopted her two mottos. I am giving myself more to time with Christ alone in the tabernacle and am consoled by his presence. Prayer has regained its priority in my life.

We share this e-mail that arrived from Scotland a short time ago. Like many others, this young man shares how he truly feels that Sr. Clare is his friend and how he has adopted her motto “all or nothing” as his own.

I feel I must write to tell you of the impact Sr. Clare has had on my life in the very short amount of time I have "known" her…

About three weeks ago, the film popped up on my YouTube suggestions and I decided to watch it—I have to say, I am not usually keen on religious films and I expected the same saccharine hagiography that is often the case. I was, however, absolutely wrong.

What I experienced was someone who was real. Not only was Sr. Clare real, she was very real to me—we had very similar backgrounds. We were from a tough part of town, I was very much aware of the political situation, too. Although I grew up in Scotland, there is quite a hangover of Protestant/Catholic hatred which has spilled over from Ireland. Our parents did not understand our vocations and tried to stop us from following the Lord. We were pretty much the same age—she would have been slightly older than me. I think this was the defining factor in her influence on me. Not only did we grow up in a similar cultural situation, but we were the same age. As Clare was going out to discos, so was I. As Clare was discerning God's will and meeting Him on retreats, so was I (I am part of one of the new movements of the Church). Our lives were very similar and we were doing very similar things at very similar times. 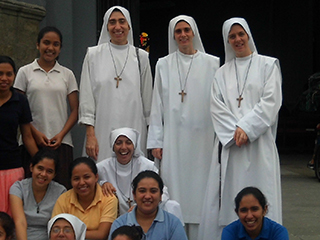 I said to my spiritual director that she is the first saint (because I believe she IS in Heaven) that I ever imagined could have been my friend. If we had been at school together, I am sure we would have been friends. This made her real. That is a great joy and consolation for me: that someone who very closely shared my early life, and whom I could see as a friend, had risen to greatness on this earth by her faithfulness to the Lord, despite all her difficulties, and is now interceding for me in Heaven, please God.

Having watched the film, I immediately bought the book. I read it in about 10 days. I did not want it to end because I knew that the end meant her death. And even though that death meant union with the One she longed for her whole life, I was still willing it not to happen.

Sr. Clare has had a profound influence on my life in these past few weeks, in a way that no other "saint" has. I have adopted her two mottos. I am giving myself more to time with Christ alone in the tabernacle and am consoled by his presence. Prayer has regained its priority in my life.

I am asking God how I might implement her unofficial motto "all or nothing." I am discerning with the Lord how he wants me to give my whole self to him. I use this phrase "all or nothing" as my examination of conscience at the end of the day, asking myself, "How have I not given my all to the Lord today?"

Dear sisters, thank you for letting the world know about this good soul, his servant Sr. Clare Crockett. I am praying each day for her beatification and canonisation. Ireland needs her. The Young need her. The Church needs her.