“Sr. Clare, You Loved Children Very Much. Intercede Now for This Little Girl.”

Sr. Beatriz Liaño:  Ask Jesus to make this family's faith in Him, their gratitude and love for Him grow, and that this little spot may not be a tumor. Ask Him for the girl to be healed completely.

We share this email from Sr. Beatriz Liaño, SHM, in which she tells us about a favor she asked Sr. Clare for.

I met Ana in October 2021, but it was only at the beginning of November that I spoke with her personally. That day she confided her heart’s great concern to me: her six-year-old daughter’s illness. During pandemic lockdown in 2020, the girl—who was only four years old at the time—began to show strange symptoms that doctors were unable to identify. She vomited daily for two months, and the doctors could not understand why. Thanks to Ana's insistence, they performed an MRI and found a 6-centimeter tumor in the girl’s head. She underwent surgery and began cycles of chemotherapy. In May 2021, after an MRI, the doctors told her parents that the little girl was clean, but they had to wait to see how things developed. In December, the girl had another MRI, and a 2-millimeter spot was found in her brain. The doctors did not rule anything out, including the appearance of a new tumor, or that a remnant of the operated tumor was growing. There was also the possibility that it was nothing, but the doctors did not dare to make a statement. They had to wait two long months until they could repeat the MRI and see the development of the spot. It was a difficult Christmas. Ana was devastated. She couldn’t avoid imagining the worst or bear the thought of starting all over again, having to face a new operation, new cycles of chemotherapy, the risk that a new operation in the brain would leave lifelong repercussions or even the possibility that her daughter would die. I tried to comfort her and promised that I would pray. 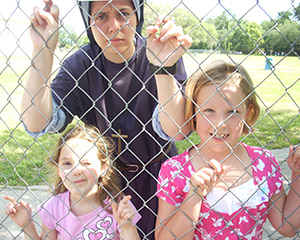 I must confess that I do not have a natural inclination to ask the saints for favors. Normally, I ask Jesus directly, or I ask Our Blessed Mother to intercede with her Son. But this time I turned to Sr. Clare and asked her to intercede for Ana's daughter. I remember saying, "Sister Clare, you loved children so much. Intercede now for this child. I know that whatever the Lord allows is good for us, and I don't have to give Him explanations or ask Him for them. But remind Him that this family has a weak faith, and that a new tumor can lead them to be scandalized by Him because of the excess of suffering. Ask Jesus to make this family's faith in Him, their gratitude and love for Him grow, and that this little spot may not be a tumor. Ask Him for the girl to be healed completely.”

Two months passed. On Sunday, January 30, 2022, I saw Ana again. From the distance, her serene smile told me everything. She gave me a thumbs-up as a sign that everything had gone well. Then she explained that, after the MRI, the doctors saw that the little spot had not grown and that it was only a calcification. Her daughter is fine.