Conversion to Catholicism in Zambia

Carl Musozya:  A sinner, with imperfections just like me, was able to leave it all behind to follow the Lord. How did Fr. Rafael even see the light of Christ in her? It was during this period that I started looking into the Catholic Church.

Carl Musozya, a protestant with a tendency toward Judaism, stumbled upon Sr. Clare’s film on YouTube. Thanks to the strong impact Sr. Clare’s story, he began to approach the Catholic Church. After receiving catechesis and preparation for the Sacrament of Confirmation, he is now Catholic!

As a child, I was baptized into the United Church of Zambia, whose baptism is recognized by the Catholic Church. I was fortunate enough to have the basic Christian foundations introduced to me at an early age, thanks to a determined aunty. However, as I grew older, my aunty passed on and the allure of the social life gripped me. I spent over a decade just blowing in the wind with occasional bouts of spirituality. After years of internal battles, I decided to give my spirituality a serious chance.

Even though I was Christian, my heart (or mind) was gravitating toward Judaism. Their friendliness and openness to conversation made Judaism more appealing to me. It was during this research process that a video about a Sr. Clare Crockett popped up in my YouTube recommendations.

I decided to watch the video simply because it said, “All or Nothing” and God knows I needed the spiritual encouragement at that moment. By the end of the video my eyes were sore and my heart was torn—why did she have to die? Here was a person who used to smoke, drink, and go clubbing, who walked away from a Nickelodeon contract and went on to do great things in people’s souls as a religious sister. A sinner, with imperfections just like me, was able to leave it all behind to follow the Lord. How did Fr. Rafael even see the light of Christ in her? It was during this period that I started looking into the Catholic Church. 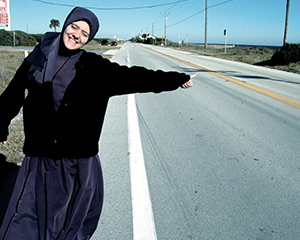 I eventually moved back to Zambia, where the Catholic Church has a fairly strong presence. After about a month, as I took a walk around the neighborhood, I came across St. Joseph’s Church. I initially walk passed it, but something told me to turn back and inquire about becoming Catholic. So I turned back, walked in and introduced myself to the clerk, who in turn went and fetched the assistant priest (then Fr. Joseph Maria Phiri). After about forty minutes of conversation and a brief tour of the chapel, I signed up for catechism classes.

My confirmation date was set for December 25, 2019! The months leading up to my confirmation were filled with joy, anxiety, and great anticipation. All the while Sr. Clare was there with me (I had developed a habit of mentally asking Sr. Clare to stay with me).

In many ways, Sr. Clare’s death breathed life back into my being. For many years I did things just because others expected me to do them. Now, thanks to the grace of God and the diligence of the priests, sisters, and lay faithful that the Lord has placed in my life, I strive to live for the glory of the Lord. I’m definitely not perfect—no one is—but my faith is made stronger knowing that God uses ordinary people. After reading the book about Sr. Clare, and knowing about her struggles, I know that I have a reliable companion on this pilgrimage.