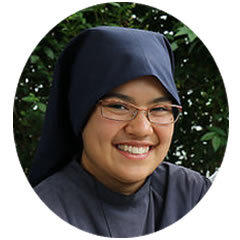 Sr. Dana Becker spent time with Sr. Clare in 2011 for WYD in Madrid before entering as a Servant Sister.

Sr. Dana is from California, USA, and entered in the Servant Sisters in 2012. She just made her first vows. 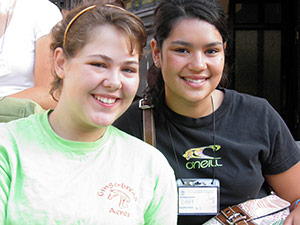 I met Sister Clare when I was 15 at a family encounter in Florida in 2010. My first impression of her was, more or less, amazement. She was young, funny, and fun to be around; that didn’t really fit in to the image that I had of what a religious sister would be like. But the thing that impressed me most about her was the way she interacted with people. After talking to her for two minutes it was as if we had known each other our whole lives. We were joking around and laughing; it was like being with my older sister, and we had just met.

In 2011 I went to Spain for a pilgrimage that the Home of the Mother organized for WYD in Madrid. During the pilgrimage, Sister Clare was the official translator for those of us who spoke English. Everywhere that we went, there she was with the microphone and a crowd of girls wearing headsets. We spent most of the time laughing.

While we walked through the streets in Spain, Sister Clare would tell us jokes, make up stories about a squirrel that had the dream to be able to fly, or call over girls to have a “street-side interview”, etc. Sometimes while we waited in lines, or in a plaza, or wherever, all of a sudden, we would hear the voice of Sister Clare saying something like, “If you can hear me, say ‘meow,’” or, “raise your left arm.” Other times she would say, “You see that girl with the red shirt? Everyone, look at her.” Because of my personality, I didn’t do these things, but it was funny to see everyone else do it, and even funnier to see the faces of the girls that didn’t know what was going on! 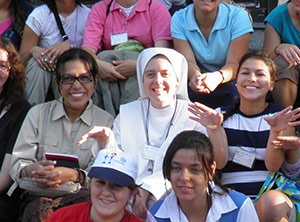 But, between all the jokes, she had no problem correcting us when we did something wrong, or telling us what we needed to hear when it was necessary. She always spoke very strongly and clearly, and in a way that we understood that she was doing it out of love for souls. And, for that reason, the way she spoke transmitted trust. I never felt offended or judged, because I knew that she was doing it for our own good, and that she wasn’t telling us anything that she herself wasn’t living. In a way, it’s thanks to her that I discovered my vocation.

One of the days of the pilgrimage, she spoke to us about happiness and how happiness is found in doing God’s will. I don’t remember very well everything that she said, but I know that she spoke to us very clearly. She told us that if we are selfish and only think of ourselves and not in what the Lord wants, we will never be able to reach happiness. Afterwards, we had time for prayer that the Lord used to ask me to give Him what I, in my selfishness, didn’t want to give.

A couple of days later, we were sitting next to each other on the bus, and she asked me what I thought about doing with my life. I answered, because of the interior struggle that I was experiencing about the vocation, that I had no clue. She looked at me smiling and, with a lot of enthusiasm said, “That’s great! It’s better that way! There are so many people who have all their plans laid out and are so fixed on doing what they have planned that nothing can change their mind, but it’s not what God wants. Don’t worry about it. Trust in God; He’ll let you know what you have to do.”

It’s funny, because she had no idea what was going on inside of me, but she would say a lot of things that really helped me. She lived looking to fulfill God’s will in every moment and He took advantage of that in order to, through her, bring souls to Him. And she continues to do so.