It Was an Afternoon Full of Joy

When Sr. Clare said goodbye to Enrique, she said with certainty, “You’ll see, Our Lady will fix all your problems

Ligia is a member of the Home of the Mother. She and her husband Enrique spent some time with the sisters from Playa Prieta after lunch on April 16, 2016. She was with them until a few hours prior to the earthquake. 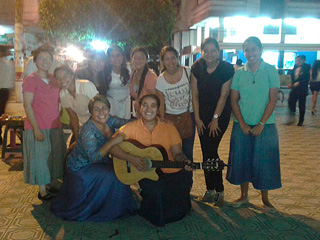 Ligia with Jazmina, Mayra, María Augusta and other girls.

Time goes by, but their memory is alive in my mind, and more so in my heart. I am completely convinced that the afternoon of April 16, 2016 that I spent with the girls and the sisters was a gift from Our Lady.

That day was full of expectations. For the first time in a long while, my husband and I were free for the weekend. At first, we had planned on going to the beach. Later on, due to the flooding, we decided to help the sisters clean and organize fundraising activities to replace the things that had been destroyed in the school. After that we received the notification that we had to assist a seminar in the Instituto San Pedro in Portoviejo. However, we decided to visit the sisters anyway, to see how we could help.

When we arrived, Sr. Clare came out to greet us with a big smile and a strong handshake with Enrique, my husband. They were having lunch, so we said that we would come back another day. But Sister Clare insisted that we come in, and later Sr. Estela invited us to lunch. We had already eaten, but we accepted eating dessert with them. It was a true family moment. We shared stories… Sr. Clare enjoyed everything and the girls did as well. I remember Maria Augusta, Catalina, and Mayra’s smiles. Mayra had been Enrique’s student. That day she told him stories about pranks she had pulled in his class, which he had never known about.

It was an afternoon full of joy and a farewell. When Sr. Clare said goodbye to Enrique she said with certainty, “You’ll see, Our Lady will fix all your problems.” She said this because we had mentioned the difficulties that we were having to get the permits to install the electric transformer. Jazmina gave me a big hug. As we left we just said, “Bye! See you soon.” We were leaving, and suddenly they were all behind us. We gave them each a hug and I experienced a great love. I later realized that it was a farewell.

Something impressed me a lot: Valeria’s gaze. I had not been able to spend as much time with her as with the other girls. I don’t know why, but as we left, I looked back and my gaze met hers. I could see peace, purity, transparency… in other words, the love of God. I don’t say this just now, we mentioned it on the way home. We spoke about what we had lived that afternoon, about Our Lady’s presence in each one of the girls and sisters. Not long after, the earthquake began.

I am certain that Sr. Clare and the girls are in the Lord’s company, and from there, they are praying for us, to help us be holy.