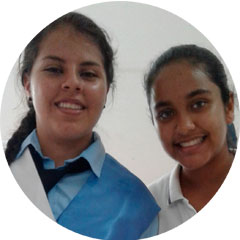 I knew Sr. Clare and the five candidates very well. I spent time with them almost every day. I was with them up until the last moment. I was even with them five minutes before the earthquake hit.

Karolina Vera is from Playa Prieta, Ecuador. She was a student at our school there. 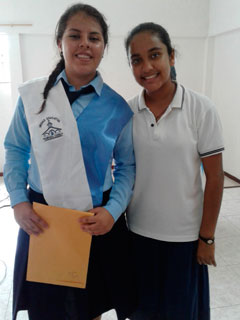 My name is Karolina Vera Bravo, and I’m from Playa Prieta (Manabí, Ecuador).

During the last week before the earthquake, we were working on cleaning the school because it had been seriously damaged by the floods. We worked very hard that whole week. I remember all of them cleaning with such joy, playing as they worked, although they never wasted time messing around.

On Saturday, April 16, 2016 – the day of the earthquake – we spent the whole morning working. We were finishing up the cleaning of the school. The Sisters and the candidates never complained, although we were all exhausted. This also helped me and brought joy to my soul. I remember at one point Sr. Clare cried out with a desperate tone, “Girls!” We all ran towards where she was. Sr. Estela and I were the first ones to arrive. When we got there, we saw that a bookshelf, full of books and encyclopedias, had fallen on Mayra and Valeria and they were trapped under all that weight. Sr. Clare was trying to help them, but she couldn’t do it by herself and that’s why she yelled with such a desperate voice. We all pitched in to help lift up the bookshelf and we were able to rescue Mayra and Valeria. They hurt their backs a bit, but they never complained about the pain, nor did they make any kind of negative comments.

After that episode, we were still a little shaken up because of what had happened, and we went to go have lunch because it was already noon.

We talked about lots of different topics during that lunch, and one of them was the topic of death. Sr. Estela asked us, “And if Mayra and Valeria had died today? What would have happened? Where would they have gone? Where would each one of us go if we were to die today?”

In that moment, I remember that the Sisters and candidates started saying, “I’m ready to die… I want to see the Lord. I just want to be in Heaven. I prefer Paradise.” In that moment, unfortunately, I was not in the state of grace. That’s why I said, “I don’t want to die yet. I need to go to Confession first.”

They all encouraged me to go to Confession, and that honestly helped me a lot. They helped me to be able to say, “I prefer Paradise, too.” After eating lunch and resting a bit, we went to Mass. After Mass, we talked for a little while. Then the candidates went to have guitar lessons with Sr. Clare. I didn’t stay to help Sr. Clare with the lessons that day because I decided to go to my house to pick up a few things I needed to spend the night with them that night. Five minutes after leaving their house, the earthquake happened.

While the earth was shaking, I thought, “Poor Sisters and candidates! They must be really scared. I’m sure we’ll all talk about our experiences of the earthquake in the meeting tomorrow.” It didn’t even occur to me that the building was going to collapse.

Five minutes after the earthquake, someone said to me, “The building has fallen! They’re all dead!” In that moment, I left my family and took off running immediately to where the Sisters’ house was. I was one of the first ones to get there. I couldn’t believe what had happened. I cried. People from the area started to arrive and we formed an improvised rescue team…

They all PREFERRED PARADISE.