Sure, there are acts of obedience that are hard for me, but I know that they are always for my good.

On April 8, 2015, during the Easter Octave, Sr. Clare wrote Mother Ana, Superior General of the Servant Sisters of the Home of the Mother, telling her about one of the biggest graces she had received during Lent: a deeper understanding of the freedom that obedience gives her. 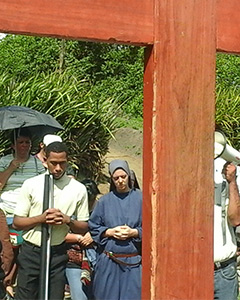 Probably one of the biggest graces I received during Lent was something Scott Hahn wrote in his excellent book Lord, Have Mercy: “What was required of Adam and Eve was a sheer act of will — uniting their own will with God's will — and thus sacrificing all the lower desires of their bodies and souls, hearts and minds.” This, as well as something Jesus said to Sor Josefa Menéndez: “Obedience is the veil under which you must disappear.” This filled me with great joy. I felt that through obedience, when I do God’s will, I am truly and authentically FREE.

In every act of obedience, the Lord requires the same as Adam and Eve: unite my will to His to sacrifice all my lower desires and to make my heart grow. Sure, there are acts of obedience that are hard for me, but I know that they are always for my good. If I want “to put on the mind of Christ,” I have to disappear.